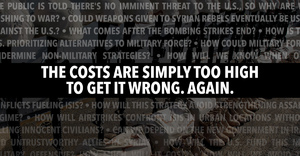 The bombs have already started dropping, but the crisis in Iraq and Syria could get much worse. This week, your members of Congress are voting on plans to equip and train groups of rebels in Syria. President Obama wants approval for this plan as the first step in a long-term war against the ISIL (Islamic State of Iraq and the Levant).

Urge your representative to vote "NO" on expanding military aid to rebel groups in Syria—and to oppose action on President Obama's proposals for a new war in the Middle East. Call the Capitol Switchboard at 1-855-686-6927 and ask to be connected to your representative's office. 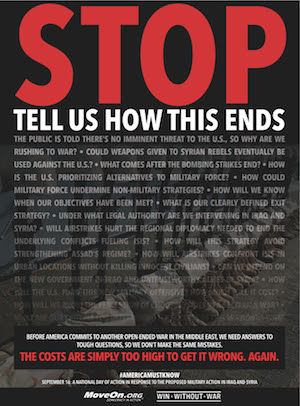 There is no military solution to this problem. President Obama has set out a multi-year war plan to eradicate ISIL. An open-ended war of intervention will not and cannot resolve this conflict.

Instead, what is needed are strong international efforts engaging the United Nations and international and regional partners focusing on unified economic and diplomatic strategies that include working to cut off funding and weapons flow to ISIL; addressing root causes of unrest in society in order to stem popular support of ISIL; increasing humanitarian assistance; and working within the region to establish political solutions.

Congress should reject any proposal that sets the U.S. on a course for more war in Iraq or Syria. Please call today. You'll join people across the country taking part in a national call-in campaign.

I'm calling to urge my representative to reject any proposal that sets the U.S. on a course for a long term war in the Middle East.

Please vote "NO" on expanding military aid to rebel groups in Syria.

There's already too much violence in Iraq and Syria, and more weapons will only make the situation worse.

Thank you for taking action to stop our nation from escalating further into the madness of war.