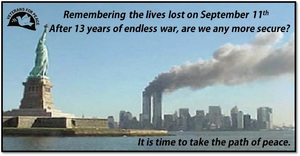 September 11th, 2001 is a day that no American will easily forget. On that tragic morning, we watched in terror as the World Trade Center crumbled. Our political leaders at the time used that fear and terror to justify the invasion of Afghanistan, propelling us into a whirlwind of endless wars. Since 9/11, the fear of terrorism and the subsequent War On Terror has dominated our country’s financial priorities and legislative agenda. Thirteen years later, the world is no safer and our leaders are no wiser. Today, the world is struggling more than ever with more threats of war, growing inequality, poverty, and enormous economic and environmental challenges.
As promised in the monthly e-mail “Waging Peace and Justice,” the national office has compiled a sample of articles for you. Some tweets that you can use today, to acknowledge the tragedy of 9/11 and to bring into question the decisions of our leaders following these events. T hese decisions have influenced U.S policy and impacted the everyday lives of all Americans.  We ask VFP members to take action during the coming weeks from September 11th-October 7th, when the U.S invaded Afghanistan.

The Worst Mistake America Made After 9/11

Reflections from the 10th anniversary of September 11th, discussing how focusing too much on the war on terror undermined our economy and global power.

Did 9/11 Justify War in Afghanistan?

This question has thus far been considered off-limits, not to be raised in polite company, and certainly not in the mainstream media. It has been permissible, to be sure, to ask whether the war during the past several years has been justified by those attacks so many years ago. But one has not been allowed to ask whether the original invasion was justified by the 9/11 attacks.

The way the war on terror has been conducted has led to many voicing concerns about the impact on civil liberties, the cost of the additional security focused changes, the implications of the invasions and wars in Iraq and Afghanistan, and more.

Terrorist Attacks More than Quadruple In Decade since 9/11

According to the report, "global terrorism only started to increase after the escalation of the Iraq war. This was subsequently followed by further increasing waves of terrorism in Afghanistan and then in Pakistan eighteen months later."

Since 9/11, Racism and Islamophobia Remain Intertwined

We live in the age where the language of violence has manifested itself in the attempted arsons of mosques, murder, racist abuse (online and offline) and a government slow to condemn acts of terrorism against its Muslim citizens. This is a remarkable and long-standing failure of public policy.

Over a decade ago,this author published a piece in the New York Times predicting that America’s occupation of Iraq would lead to the rise of an enormous suicide terrorism campaign and increase the risk of suicide attacks against Western civilians from countries associated with U.S. occupation. This prediction came true. The same data also promises that American military reengagement in Iraq to help suppress the current Sunni revolt would lead to a resurgence of anti-American suicide terrorism.

The Global Terrorism Index, produced by the Institute for Economics and Peace, is the first index to systematically rank and compare 158 countries worldwide over a ten year period to shed light on the impact of terrorism.

How the US, its allies, and its enemies all made ISIS possible

The Iraqi and Syrian governments played a major role, but so did the United States, Iran, and Gulf monarchies like Saudi Arabia. This doesn't just shed light on ISIS's past and on the tangled web of responsibility for its rise. It also illuminates much larger problems: the unpredictability of proxy wars, the danger of unintended consequences, the ways in which conflict can favor extremists, and the scale of how difficult it will be to eliminate all of the factors that have led to ISIS.