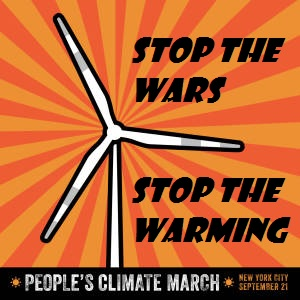 Where:  West Central Park (location to be announced)

We are at a crossroads, faced with a climate crisis that threatens to end our world as we know it.  We can’t afford the greenhouse gas emissions from the way we live and from war and preparations for war.  We must end the fossil fuel energy economy which war protects.

VFP and IVAW who want to march together please wear black t-shirts with the VFP or IVAW logo on the front. We want to have a uniform, sharp appearance. Veterans will be meeting on Sept. 21 prior to the march in West Central Park (location to be announced)

The specter of nuclear war still hangs over the world. US policy is the main obstacle to effective global action on climate change, world peace, and nuclear disarmament.  Peace, antiwar and environmental activists must join together for immediate action!

The Peace and Justice contingent will assemble at 10:30 am for a rally on Central Park West north of Columbus Circle.

Music by Emma’s Revolution, Dar Williams, and Holly Near.

We go to New York to demand that the US government:

Be sure to check out the Climate Convergence conference at Empire Community College Friday, September 19 and Saturday, September 20, with keynote speakers including Naomi Klein and many more.  To keep updated visit their website, convergeforclimate.org

Look for VFP flags and banners.