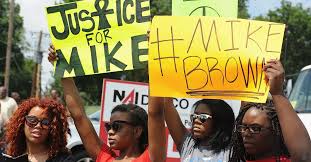 Groups on the ground in St. Louis are calling for nationwide solidarity actions in support of Justice for Mike Brown and the end of police and extrajudicial killings everywhere. (See call below)

It is important for Veterans For Peace and the greater peace movement, to support and participate in these events and where possible organize one because the peace we seek abroad is directly tied to seeking peace at home. This crisis in Ferguson/the Greater Saint Louis area is a facet of the war abroad returning home. The militarization of the police is in full effect and the social and economic forces oppressing poor people and people of color here mirror those oppressing people around the globe. We must work for peace at home so that we can build allies for peace abroad. People cannot work for peace thousands of miles away when they cannot find peace at home. We will not have one without the other. This unfortunate tragedy is an opportunity to build power for change. Let’s be thoughtful, respectful and mindful as we do our work, but most of all, let us not miss or waste this moment.

THIS SATURDAY, St. Louis Calls for Solidarity Actions for Justice for Mike Brown, for Trayvon Martin, for Eric Garner, for Renisha McBride, for Amadou Diallo and so many others.

Groups on the ground in St. Louis are calling for nationwide solidarity actions in support of Justice for Mike Brown and the end of police and extrajudicial killings everywhere. On Saturday at 1pm CST -- one week after the murder of Mike Brown by a Ferguson police officer--we in St. Louis will gather at the location that Mike was shot in the Canfield Apartment buildings. We ask that you gather at the places in your community on Saturday where police and extrajudicial killings have occurred to memorialize lives that have been lost and demand justice by ending systemic violence upon communities of color.

We know that the murder of Mike Brown in St. Louis is just one of hundreds of murders per year by extrajudicial means throughout this country. There are too many names to list: Mike Brown, Trayvon Martin, Eric Garner, Renisha McBride, Amadou Diallo and so many others. Just in the past week since Mike’s murder, the Los Angeles Police killed a 24 year-old man who was laying down when shot. Enough is enough--these killings must stop. We must end the systems of white supremacy, police brutality and inequality for communities of color that lead to these police killings. We hope that with renewed attention on this issue, we can widen the conversation to address both justice for Mike Brown and the underlying systems of oppression that play out against people of color on a day-to-day basis. Follow this link to read more. https://actionnetwork.org/groups/solidarity-actions-for-mike-brown