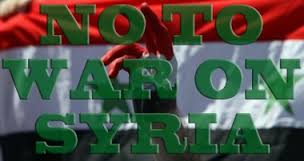 For the second time in less than three years President Obama is leading an effort to take the U.S. to war. Calling on Congress to follow his lead, the President’s reasoning is to punish Syria for alleged chemical weapons use and to deter future deployment of this obscene and banned weapon. The President claims military action and killing more people is necessary to protect American values and national interests and to enforce international norms.

Veterans For Peace condemns the use of chemical weapons and we call for those responsible to be brought to justice by legal means via the United Nations and and not by US bombing.
Any military action without U.N. authorization is illegal and violates the international norms the President claims he wants to protect. VFP has made a clear statement opposing U.S. military intervention, whether direct or indirect and we call for an escalation of diplomacy not war. Most of the U.S. public agrees that war is not the answer yet the war drums keep pounding louder and the war hawks gather for their feast. Now we must act to stop the President’s drive to war by hitting the streets and concentrating on Congress.