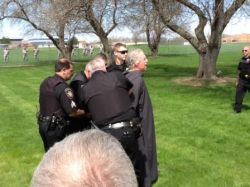 Thirty one members of the “Upstate Coalition to Ground the Drones and End the Wars” were arrested Sunday at Hancock Air Force Base protesting what is the illegal use of drones in Afghanistan, Pakistan and other countries. Drones are flown from Hancock Field. Over 275 people marched in a solemn funeral procession to demand that Hancock Air National Guard Base cease drone strikes. People carrying banners and coffins identified countries where U.S. drone attacks have killed over a thousand innocent civilians. As they were arrested, some read the names of people who have died in the drone attacks.

People who participated in the demonstration, including some who were arrested, came from all over the country to raise an outcry against the proliferation of drone strikes abroad, including countries with whom the US is not at war. Drone use violates the US Constitution, Article 6, and International Law, which the U.S. has signed on to. Demonstrators also object to the militarization of the police and the growing domestic use of drones. The protesters raised the issue that drone use globally makes Americans unsafe because of the blow back effect.

Demonstrators attempted to deliver a war crimes indictment to the base. It reads:

We, the people, charge the US President, Barak Obama, and the full military chain of command, to Commander Colonel Greg Semmel, every drone crew, and service members at Hancock Air Base, with crimes against humanity, with violations of part of the Supreme Law of the Land, extrajudicial killings, violation of due process, wars of aggression, violation national sovereignty, and killing of innocent civilians.

The thirty one arrestees were arraigned in De Witt Town Court before Judges Benack, Gideon, and Jokl, who imposed bails ranging from $500 - $3500, totalling $34,000. Some of the defendants were released with appearance tickets Others are refusing to post bail and will be held in jail until the next court date of May 7th & 8th. Donations may be sent to the Syracuse Peace Council, with checks made out to Syracuse Peace Council,note : Upstate Drone Action Bail Fund. 2013 E. Genessee St., Syracuse, NY 13210. 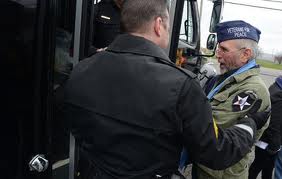 Category: VFP in the News
Tags: Veterans For Peace, Hancock Air Base
secret