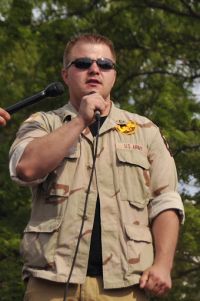 This coming fiscal year, the United States is set to spend more than $640 billion dollars on the Pentagon and war, accounting for more than 60 percent of federal domestic spending. In excess of $85 billion of that will be spent on the war in Afghanistan alone.

This unfathomable amount of money was approved by the House of Representatives in the National Defense Authorization Act. These funds will serve to bring suffering and pain to innocent people, further militarize the world and undermine peace and stability for generations to come—all on the backs of those who struggle at home.

In the backdrop of such spending, we’re told that we’re in a financial crisis. Elected officials tell us it is time to make tough choices. There isn’t enough money for programs like “Meals on Wheels” and for ensuring everyone has access to adequate healthcare. Our schools and bridges must wait to be repaired. New roads and schools must remain unconstructed.

Yet some of us know better.

Last weekend in Chicago, dignitaries from around the world met for the NATO (North Atlantic Treaty Organization) Summit on Afghanistan. U.S. veterans of the wars in Iraq and Afghanistan also gathered to march in protest and return our military medals to NATO. The demands were simple: No NATO, No War. Thousands joined the veterans to march to the NATO meeting location. One by one, nearly 50 of us returned our medals. Removing one medal from his chest at a time, Aaron Hughes of Iraq Veterans Against the War summed it up well when he pulled the final medal from his old military uniform: “And this one is because I’m sorry.”

As veterans, we know the cost of war firsthand. Many of us—myself included—have lost friends to death in combat, by suicide and to addiction. Rates of divorce, addiction, suicide and homelessness are at record highs among U.S. veterans. We know firsthand the stories of the widowed and divorced, the broken and the damned. We have watched friends fall apart and sometimes we’ve fallen apart ourselves. We have seen the pain on the faces of the victims of bombs made under the auspices of American jobs. We have watched as the light of humanity seemed to flicker out in the face of dehumanizing war. And many of us have left pieces of ourselves—physical, mental and emotional—in the places we’ve served.

What exactly is the benefit of spending so much on preparing for and making war? Does it really enhance our liberty and freedom? Do we really feel safer? I can’t take more than ten steps without being on some kind of camera these days. I’m constantly reminded to be vigilant as I take public transportation here in Washington, DC. Is it silly that our government is spending nearly two-thirds of the discretionary budget on “defense” and they’re relying on me to phone a hotline if I see something suspicious?

Mine aren’t the only eyebrows rising. In the years that I’ve been a pro-peace advocate since my honorable discharge from the U.S. Army in 2004, people seem to be getting the message like never before. As we marched in formation, the Chicago police lined the perimeter of the parade route. I wondered as I marched how many of them have felt recent budget cuts or watched colleagues get laid off. At one point, while chanting “Troops need healthcare, not more warfare” an officer alongside us chanted “Police need healthcare, not more warfare.” Others joined in and we picked it up. It was one of those rare moments in which we actually knew the message was reaching someone.
My hope is that more people start to receive this message. There are choices to be made. Right now, the people making these choices are not doing so in a representative way. Congress cannot continue to fund wars and weapons on the backs of the poor, elderly and shrinking middle class. Building a just and equitable society means human needs must take first priority. There is enough money; how we choose to spend it is the question.

Matt Southworth is Legislative Associate on Foreign Policy for the Friends Committee on National Legislation.

Category: VFP in the News
Tags: matt southworth, VFP Board of Directors, VFP Board
secret