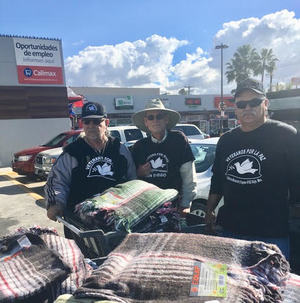 Deported Veterans Advocacy Project, founded by Veterans For Peace, actively works to embrace, encourage, uplift and support all Deported Veterans around the world and to bring international awareness of the injustice of our deportation from the U.S.

The Unified U.S. Deported Veterans/Veterans For Peace Hector Barrios Chapter 182 is for U.S. military that have been deported or are in deportation proceedings, assisting them to integrate into the community as productive residents while searching for legal avenues to return home to the U.S.

The Unified U.S. Deported Veterans/VFP Hector Barrios Chapter 182 has an office in Tijuana, 40 yards from the Ped West Border Crossing, that provides services for those U.S. military veterans who have been deported or are in deportation proceedings.

The office provides support in contacting their families in the U.S., housing referrals, medical needs and substance abuse treatment, support in obtaining documents, such as Mexican identification and DD-214, benefits and pensions filing with the V.A., employment interview preparation and job bank and referrals.

The Unified U.S. Deported Veterans/VFP Hector Barrios Chapter also continues to support those seeking asylum to the United States in Tijuana.  They regularly provide water, food, clothing and other forms of support.