The U.S. has spent approximately $1.3 trillion in the past decade on the wars in Iraq and Afghanistan. 1

How Does U.S. War Spending Compare?

The war economy has hindered U.S. job creation. This is because war spending reduces funds available for alternative job sectors and domestic programs. For example, $1 million in military spending creates approximately 8.3 jobs, while $1 million in alternative spending would create 15.5 jobs in public education, 14.3 jobs in healthcare, 12 in renewable technology, and 11.1 in construction. 1

The $121.1 billion spent in Iraq and Afghanistan in 2012 alone could have funded… 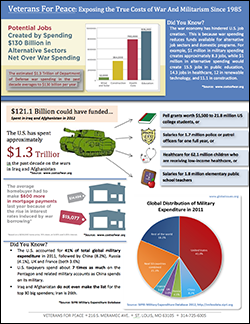