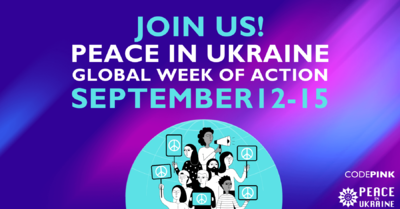 September 12-15, and every week until the Ukraine war ends

Veterans For Peace is part of the Peace In Ukraine Coalition, along Code Pink, Peace Action, World Beyond War, Democratic Socialists of America, Women's International League for Peace and Freedom and other national and local peace and justice organizations.

For information on local events, and other valuable resources, visit www.peaceinukraine.org

Our message is clear: We want Diplomacy Not Escalation.

We want the US government to urgently engage in good faith diplomacy that respects the legitimate security concerns of both Ukraine and Russia.  We are telling President Biden and Congress that we want:

"As veterans who have experienced the carnage of war, we are concerned not just about civilian deaths in Ukraine, but about the young soldiers on both sides who are being killed and injured in the tens of thousands.  We know all too well that the survivors will be traumatized and scarred for life.  For these and many other reasons, the terrible war in Ukraine must end now.

We know that our own government had a large role in creating this war crisis and is now working overtime to keeping this war going. We are asking you to listen to veterans who say Enough is Enough - War is Not the Answer!  We call on ALL SIDES to stop the killing now.

We want urgent, good faith diplomacy to end the war in Ukraine, not more US weapons, advisors and endless war, and certainly not a nuclear war."