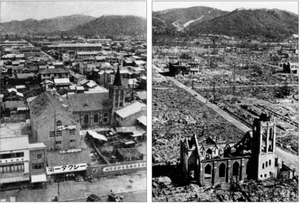 I was eight years old when the bomb that was created just a few miles from where I now live in Santa Fe, New Mexico, did what you see in this picture.  My father was a Marine in the Pacific at the time, and he was grateful for the bomb that we all were told had ended the war.  We know now that the war was essentially over before the bomb was dropped.  The people of Hiroshima and Nagasaki were needlessly sacrificed in order to intimidate the Soviet Union.

It is nothing short of miraculous that we have managed to avoid a cataclysmic conflict in the intervening 76 years.  Reflecting on the horrors of Hiroshima and Nagasaki should not only remind us of the devastation that nuclear conflict would impose on the planet were it unleashed today; it should also sharpen the realization that nuclear arsenals on hair trigger alert hang over our heads like a sword of Damocles and threaten us at every moment with Accidental Armageddon.  Given the role of the United States in initiating and continuing the nuclear race to oblivion, we have a special obligation to use all our might to pressure our government to put an end to this obscene existential danger.

For this reason, the Veterans For Peace Nuclear Abolition Working Group calls upon VFP Chapters and individual members to commemorate publicly the nuclear bombing of Hiroshima and Nagasaki on the weekend of August 6, 7, and 8.  If your chapter is not initiating a commemorative action, then find one near you organized by one of the many allied organizations that address nuclear issues.

After the action, please send pictures and a brief description to press@veteransforpeace.org
Wage Peace!
Ken Mayers for the VFP Nuclear Abolition Working Group.
Download the flyer here!
The VFP Nuclear Working group would also like to invite everyone to their biweekly meeting on Monday, Aug. 9, at 6 pm Eastern, 5 pm Central, 3 pm Pacific. Bruce Gagnon of the Global Network Against Weapons and Nuclear Power in Space will be our guest speaker during the first half-hour. We will also remember all the victims of nuclear bombs and nuclear war preparations.  Contact Gerry Condon for zoom information at gerrycondon@veteransforpeace.org.
Category: Uncategorized
Tags: Abolish Nuclear Weapons, working group