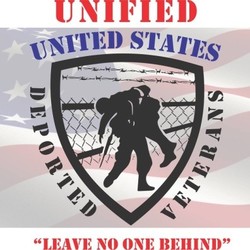 How can the Christmas Truce of 1914 relate to the present climate our deported veterans will live this Christmas of 2020? I began thinking - who is the enemy in 2020 that they are facing? As I reviewed the events of 1914, and the present situation we are facing, a very strong word came to mind. Who is the enemy? Perhaps hate, which is used as fear to create a fictitious enemy. As the story of 1914 states, when British and German soldiers opened a dialogue, they came to understand they were fighting for the same ideals: freedom. So then who were the good guys and who were the bad guys? Seems like both were fighting something neither understood! Greed, corruption, and unfounded hate.

Present day deported veterans fight every day, not an unknown enemy but a very familiar enemy within their own ranks. Those that one day they may have served next to! Perhaps were even in battle with, protecting each other. Yes, I am talking about the deportation machine with its hate wall. Not only physical, but within the heart that separates those that were willing to die for what they were led to believe was freedom, actually took their freedom, tearing them from their families.

In the last few years, we have seen the militarization of our border increased to unprecedented levels that may even lead you to believe that Mexico and the USA are at war.

On a few occasions while holding rallies at the Mexico/USA border as well as at the Border wall at Friendship park, deported veterans have had the opportunity to have a conversation with those same officers, preventing from crossing that line, that border. Mostly talking about where they had served, about ideals that are shared, freedom, security, which we all agree is what we all want for our family. Perhaps politicians can learn to handle conflict by listening to those they send to kill and die, to resolve the conflict they have created themselves.

Deported veterans, as the soldiers of 1914, are fighting the same enemy - hate, created out of fear, by those in power, hungry for greed and power. We are thankful to VFP, that they are willing to cross that so-called enemy line to come across the border in aid of their fellow veterans. The logo of Unified US Deported Veterans depicts the support of VFP, with a soldier carrying another soldier across a battle line.

“LEAVE NO ONE BEHIND”