The President of the United States has just unilaterally wagged the tail in an act of war against Iran.
I am heartsick.  I have skin in that game. It’s up front and personal to me.
The images that haunt me in this moment are indelible, seared into my experience deeply.
I know the human cost of war. I live with its consequences each day of my life.
The ghosts from half a century ago of those I saw mangled and die.
The agony of the Gold Star wife who I held in my arms after finding her dead husband, a career Marine who took his life, unable to face a fifth combat deployment to Afghanistan.
The Gold Star mothers I have held in my arms.
The memorial services for the fallen where I’ve been called upon to speak.
The returning soldiers and Marines I held in my arms in years past at Arlington West.
The vets I’ve been honored to support in the Warfighters’ Advance Post-traumatic stress retreats I’ve participated in.
And I have personal skin in this madness: my own son whose military career began some nineteen years ago as a Marine. After eleven years in the Corps and one deployment to Iraq, he got out, finished his degree and was granted a commission in the Army National Guard.
Now a Captain and a Battalion S-3, I am proud of his accomplishments, prouder still of his strength as a leader, one whose commitment is to his troops.  He is tough, yet compassionate: one who leads by example and who owns the well being of his troops over all else.
And he, and all those who serve on active duty, in the reserve and in the guard are the meat in the sandwich of war.
They and their families live with the possibility of redeployment to harms way, now made more probable by a Commander-in-Chief through an unnecessary and illegitimate act of war against Iran.
I will wear this armband until our nation ends the madness and our troops are withdrawn from the middle-East.
I may well be buried wearing it.
I am heartsick. I deeply know the human cost of war.
I will stand against that madness with all my energy.
Stand with me, if you will.
Dan Kelly
Vietnam, 1966-1967
Veteran for Peace
Military Families Speak Out 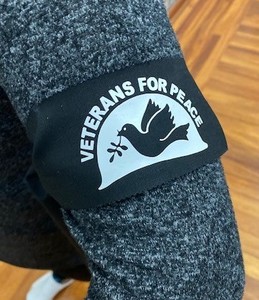 Veterans For Peace, inspired by Dan's poem is now offering black armbands.  To order five, fill out this form and the National Office will send you a package.

Wearing black armbands in opposition to the war gained popularity as a result of an action five students from Des Moines took in 1965.  These students wore black arm bands to school to protest America's involvement in the Vietnam War. Those strips of cloth became the subject of a case that went all the way to the U.S. Supreme Court. Because of those Iowa students, the right of all American students to express their political opinions was strengthened.  Read more of the history.