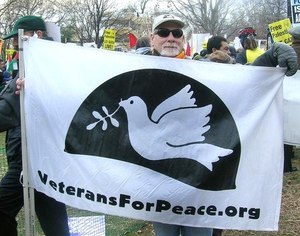 Monisha Rios, a former Veterans For Peace National Board Member, and founder of MIRA, a grassroots research project focusing on moral injuries related to the causes and consequences of U.S. wars, from the perspectives of impacted communities and ecosystems, and whose primary work is focused on the impacts of militarized and weaponized psychology has been involved heavily in organizing and coalition-building within the American Psychology Association (APA) and keeping a close eye on military psychology and the APA's historically profitable relationship with war.

Last year the APA attempted to rescind previous rulings on psychologist's participation in military torture. Monisha, along with another member of the APA Watch coalition, co-authored a statement in opposition to these changes and for the American Psychological Association's Council of Representatives to stay true to its commitment to culture change, transparency, and a much-needed focus on human rights. VFP formally adopted this as a position statement.

This week a new story came out:

"In recent days, a group of military operational psychologists has sent a letter to APA authorities expressing outrage over a panelist who was scheduled to participate in a symposium at last month's annual convention. The session was titled "From Aspirational to Actionable—Changing APA Ethical Practices in the Post-Hoffman Report Era" and the target of their upset is a member of Veterans For Peace (VFP). Although ultimately unable to attend the event, he had provided this advance summary of his background and perspective:

While my time at Abu Ghraib took place after the infamous events of 2003 and 04 were revealed and operationally halted, at least in the tent camps, I was a witness of and participant in unethical and inhumane treatment of detainees. During my assignment to Abu Ghraib, I witnessed detainees killed and maimed due to insufficient protection from indirect fire, detainee suicide, detainee abuse at each other's hands as members of opposing factions were knowingly housed together. I placed cuffed and shackled children in un-air conditioned cages in tents for punishment purposes and was forced by the nature of my duty to contribute to their general mistreatment."