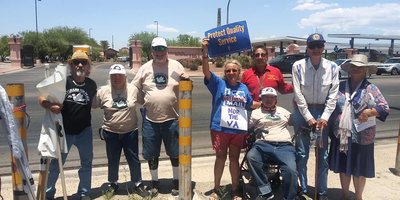 UPDATE:  Save Our VA & the Work Group fr:  Buzz Davis, Tucson SOVA Action Team, dbuzzdavis@aol.com
We have people trying to Fight Back to Stop the Privatization in 27 states and 55 cities.
Some folks are fighting all by themselves.  Others have been able to build or join a coalition to get help.  In Tucson the A. T. is comprised of VFP members, Alliance for Retired Americans members, the Pima Area Federation of Labor (PALF) members, Jobs with Justice members, AFGE (Am. Federation of Government Employees) members (the VA major union), Indivisible members, citizens and two U.S. House members help us also
We do monthly VA Gate Actions bannering, flags, signs, and leafleting and periodic press conferences.
On 8-21-19 we have a 7AM Gate Action and 8 AM press conference on Stop the VA Privatization and Stop the Union Busting (Final Agenda attached).
At that press conference US Rep. Raul Grijalva announced that he was going to organize and introduce a House of Representatives Resolution to Stop VA Privatization, Stop the Union Busting and Give Workers the Right to Organize.
Our little DC Lobbying Team is working to help get that done.  Once introduced we will also all VFP members to help lobby their House and possibly Senate members to co-sponsor the Resolution and talk about those issues in their 2020 campaigns.
Pres. Trump and VA Sec. Wilkie are doing a highly skill effort to destroy the VA healthcare system via first the Choice Act and now the MISSION Act.
From now to Jan. of 2021 it is unlikely that Congress or we can stop them.
What can you do?  Join/form a SOVA Action Team in your community, conduct Gate Actions, press conferences, town halls, write op eds and letters to your local newspapers, talk to groups, etc.
Most important you can work with your House and Senate members staff and maybe the elected officials themselves to help them understand the VA issues and ask them to help us in specific ways.
And you can quickly decide who you want to support for president of the United States and start working for that persons success in the Democratic Primary if you vote Democratic or in your party's primary.  Then after the primary choose who you will support in the general elections and help that person win.  Also helping Congressional candidates who are pro Stop VA Privatization win is extremely important especially if your state has races with can flip the US Senate.
If Mr. Trump wins re-election my guess is that by 2024 many VA hospitals and clinics will be dead.  If Mr. Trump wins re-election the 700,000 member AFGE federal union and all fed. unions may be dead.  These men and women are playing for keeps.
In order to get periodic updates on the Stop VA Privatization Work Group effort you have to join our email list and get to work if you are not already working on this topic.  We need all the help we can get.   If you have not joined the effort you may do so by completing this survey:  https://www.surveymonkey.com/r/MTF76TP
If Mr. Trump does not win re-election and if the Congress was to be controlled by the Democrats, we still do not know what will happen.  The Congress must do a MISSION Act Repair bill in order to turn around the privatization.  And it needs to force the VA to fill the 49,000 vacancies at the VA which are mostly in healthcare.  All these things are very hard to do when powerful special interests are calling the shots and politicians are saying Yes Sir!
Peace!  Buzz Davis, member Stop VA Privatization, Fix, Fund & Fully Staff the VA Work Group of VFP and Tucson SOVA Action Team, 608-239-5354
###
We Are All Aging
I have spend decades telling my body what to do.  It responded with nary a whimper.
Now it seems suddenly, I tell my mind, "This is what we are going to do," but all of a sudden my body says, "That's what you think!"
Result:  I can not longer do all I want.  So what is next?
Each of us knows that someday we will have a good day, sit down to read a good book and pass off into Never Never Land.
But on the other hand we have reality.
So here is a good link from the VA about thinking about reality.  In your chapter, or among your friends who are vets, you probably have people who are in a tough way.  And if they are living with a partner that partner may also be in a tough way.
If the vet gets VA care, here is a place they can start to look for help.  And at each VA facility there is a patient advocate.  If the vet or partner, needs help then maybe the Patient Advocate can help them. https://www.va.gov/GERIATRICS/Guide/LongTermCare/index.asp
Category: Uncategorized
Tags: SOVA, Buzz Davis, Save Our VA, Tucson