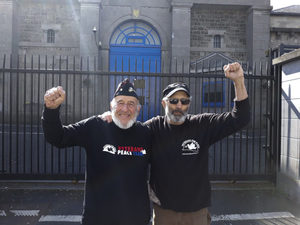 Our gratitude and appreciation for your efforts, letters, e-mails, donations and actions is flowing to you from across the Atlantic. Receiving pictures of our friends carrying Free Ken and Tarak, Free the Shannon Two banners and letters both from Ireland and the States while we were in prison meant a lot and made us humble, almost feeling guilty that we were getting all that attention, solidarity and concern.

The action we took, making our way onto the airfield and approaching a plane we believed had onboard US troops and their weapons, was nothing out of the ordinary for people of conscience, certainly nothing heroic, yet we paid and are paying a price in terms of 13 days in prison and losing our freedom to come back home. Knowing we have your ongoing support makes it so much easier to pay that price.

More important though is your solidarity with the long-standing effort to respect Ireland's neutrality and get the US war machine to stop using Shannon Airport as a refueling stop for troops and munitions. For many reasons, including the Irish public's pride and support for Irish neutrality, this is a battle against US war making that can be won. If and when we do, if Ireland stands up and says they will not participate in any way in US war making, it will set an example for other countries.

Apparently, the fact of US military veterans joining in this effort and taking a stand has had an impact. We have been covered in the Irish Times (Ireland's equivalent of the NY Times) Irish National TV and radio, and even many of the guards at the prison were friendly and respectful and encouraged us to maintain our efforts. We were very impressed and uplifted by the political awareness of both the guards and prisoners and for their support. A number of the guards said it was "a damn shame" we were being held without bail.

We are out but we could be in Ireland for years awaiting a jury trial. As long as we are here, we will keep speaking out about US troops landing at Shannon, and we have some (hopefully) non arrest-able but effective actions planned. On this coming Monday and Tuesday, you can help pressure the Irish government to allow us to return home, and to once and for all affirm Irish neutrality and stop allowing US troops, weapons and munitions to land at Shannon.

Here are some talking points for calls:

Former U.S. Marine Corps Major, Ken Mayers, 82 and former U.S. Army paratrooper, Tarak Kauff, 77, spent two weeks in Limerick Prison after being denied bail and are now out of jail but unable to return home as the court has decided to hold their passports stating they are a "flight risk."

Since 2001 nearly 3,000,000 U.S. troops with their weapons have been transported to and from US wars through Shannon. CIA Rendition flights with prisoners on their way to being tortured have also stopped at Shannon – all in direct violation of Irish neutrality and international law, including the Geneva Convention on War; the Hague Convention on Neutrality; the Nuremberg Principles; the UN Convention Against Torture and the UN Charter.

You can go to http://www.stopthesewars.org/kenandtarak/ and scroll down to Action Points for more and to Resources on where to call and write.

Thanks again for all you do. We are proud to be part of Veterans For Peace.