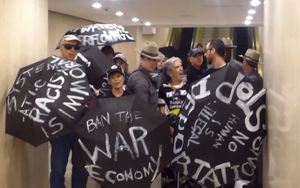 John Amidon from Chapter 10 in Albany, New York sends us a report of the May 21st action at their state capital as part of the Poor People's Campaign.

"The Poor People's Campaign, 5/21/18 at the Capital Building in Albany, NY. A tremendous witness against, racism, Islamophobia. discrimination against the poor and the need for prison reform, etc. We need to be our own media. What once was the fourth estate is now little more than a propaganda mill for the rich ruling elites and multi-national corporations. Aside from the Mayor of Albany criticizing the Poor Peoples Campaign in Albany, what media coverage did you see? What coverage reflected the spirit of this campaign, the cry of desperation from the hearts of the poor, the need for a living wage, the longing for some modicum of dignity in the face of a violent, oppressive and uncaring government. Everyone, we need to be our own media, if we want the world to know that some of us stood up in solidarity with our brothers and sisters. We may or may not win but truly what is important is we did the right thing and if you want to others to know, others to be inspired then lend a hand and spread the word. Share this videos and others like it because it is the only way people will know. The main stream media has been bought and sold and won't. It is your choice. Show the country who we are. Resist! Be proud and stand together and love.

The Poor People's campaign today, 5/21/18 a tremendous witness against racism, Islamophobia, discrimination of all types and the need for prison reform, etc. Check out the short video of some of today's action."