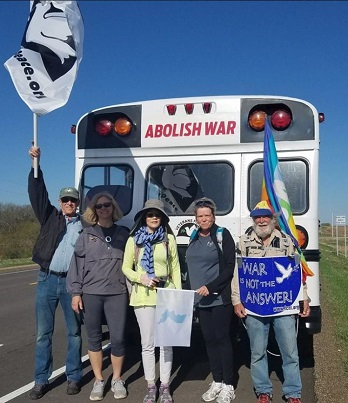 Kyong Juhn is a Korean-American photographer/walker based in Rochester, Minnesota.  She started May 5, 2018, Juhn's new project, Walk for Hope and Peace, will travel over 330 miles by foot, traveling 10 to 20 miles each day. It will approximate the distance her mother traveled 70 years ago when she fled North Korea in the midst of the Korean War.

"When Juhn first conceived of her journey, “Walk for Hope & Peace,” last spring, the U.S. and North Korea appeared to be careening toward military conflict.

After North Korea tested a long-range missile last year, analysts warned that the North could reach targets in the U.S. The odds of military conflict between the nuclear-armed countries seemed higher than at any time since the end of active hostilities in 1953.

“I was devastated by the news, and I couldn’t do anything about this,” Juhn said “But I wanted to do something. All I can do is walk.”'

"This project prompted me to think about the people who are in need of hope and peace," she explains.

Juhn isn't alone either. Veterans for Peace has been with her since day one. Juhn and the organization bond over a yearning for a peaceful global future.

"When my granddaughter is going to be 75, what is she going to have here?" Veterans for Peace president Dave Logsdon says. "So that's what keeps you going, is to do it for the children and other generations."