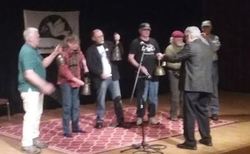 Below is a note from Larry Johnson, World Storytelling Day organizer and past president of VFP Chapter 27

"I served as a conscientious objector, unarmed medic, during the War in Vietnam, and have taught storytelling and video all my life, mainly focussing on environmental and peace with justice content.  In 2003 I was able to be part of a worldwide group of storytellers, led by Ulf Arnstrom in Sweden, planning what has come to be World Storytelling Day at www.globalstorytellingday.org  Each year, since 2003, there has been a worldwide theme and events happening around the world, these days in 25 or more countries.  Most events are not overtly peace-oriented, the way we think as peace activists, but the initial inherent theme was something like, "If I can hear your story, it's harder for me to hate you".  I choose to organize here in the spirit of the peace activism I believe in.

The world theme this year was WISE FOOLS, and I made our program WISE FOOLS:  WISDOM ON THE FOLLY OF WAR, with Vets for Peace as sponsor. 150 people gathered in the Landmark Center, a historic building in St. Paul, once the Federal Courthouse, where among other things, World War I war resisters were tried.  Before the program there was tabling by Veterans for Peace, some local storytelling groups, as well as other peace and justice organizations.  Landmark will be the site of the closing event at this year's National VFP Convention, honoring the 90th anniversary of the signing of the Kellogg-Briand Pact to outlaw war.  As David Swanson's WHEN THE WORLD OUTLAWED WAR points out, there was an enormous number of peace groups, after the World War I Armistice, who got behind the drive for peace that led to Kellogg-Briand.  Four are still active, and we honored them at the beginning of the program:  Women's Intl League of Peace and Freedom, Fellowship of Reconciliation, American Friends Service Committee, and War Resisters League.  We also honored Dr. Harry Skornia, the ardent peace activist who founded PBS, but is virtually unknown, even to those who work in public broadcasting.  In Minnesota, Kellogg Boulevard, running by the Landmark, has been thought to be named for cereal that talks, not for the only Minnesotan to receive the Nobel Peace Prize.  Dr. Skornia is equally unheard of.
The storytellers for the evening were selected to reject the premise of the Burns/Novick Vietnam films, stating that "The War in Vietnam was started in good faith, but mistakes were made".  Our premise was THE WAR IN VIETNAM WOULD NOT HAVE HAPPENED, HAD WE BEEN ABLE TO TELL AND HEAR THE TRUTH AT THE TIME.  Storytellers included a Catholic priest who was invited to Vietnam in 1971 to help stop the war, a Vietnamese-American woman/"boat person" who lost many family members as she was forced to flee her homeland, and a female veteran telling of blatant military sexual assault, despite the severe penalties for sexual impropriety outlined in the Universal Code of Military Justice.  We had a Korean War era veteran who was sent to Vietnam in 1954 to help plan for the unlawful war, and who late in life discovered his church's Just War Theory really said, "It's a just war if no civilians are harmed, and if you don't attack another country". John Varone, former national VFP board member, and chapter 27 President, told stories through music with the songs of the 60s, and we had an African American storyteller/civil rights activist, who lives in the truth of Dr. King's now mostly overlooked Vietnam speech:  "I had great hope when LBJ's Great Society began, but now I see clearly we can never solve the problems of racism and poverty, as long as we spend so much money sending our young people away to kill poor people overseas"
Several people that night told me, "That is the best storytelling program I've ever been to", and my friend Ulf Arnstrom, in classic Scandinavian understatement, sent an email saying, "It is so good for us to see American espousing a different agenda than your government seems to be putting out"
Larry also included this list of resources for "FOR FACING THE FOLLY AND THE TRUTH ON THE WAR IN VIETNAM"
Category: Uncategorized
Tags: World Storytelling Day, Larry Johnson, Vietnam Full Disclosure, Chapter 27, Burns/Novick, Documentary, peace, Vietnam