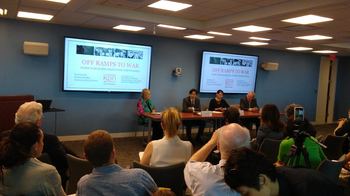 About 100 people concerned with the current tension with N. Korea attended the one-day conference at George Washington University on 6/13.
Former Sec. of Defense William Perry delivered a keynote speech in which he emphasized that the best way forward on our relations with DPRK is to talk to them with the aim of freezing their nuclear and missile development. It is to be noted that the Trump administration is continuing the unrealistic demand of the previous administration that N. Korea should take steps to denuclearize first before talks can start.
Prof. Bruce Cumings, a top history prof. on Korea, also pointed out that just imposing further sanctions on N. Korea will not succeed in forcing the country to give up its nuclear weapons, which they deem essential for deterring US attack against them. He stated US officials have tried to bring a regime change in the North through sanctions-driven policy from 1949, and it has failed so far.
Picture is Ann Wright, a steering committee member of Vfp-Korea Peace Campaign, who moderated a panel discussion on the "Legacies of the Korean War," dealing with the urgent humanitarian need to help reunite the separated Korean American families who have loved ones in N. Korea as well as the retrieval of the 124 sets of remains of US soldiers missing from the Korean War that were collected by N. Koreans.
Wage peace, not war in Korea!
Peace Treaty now to end the Korean War!
Category: Uncategorized