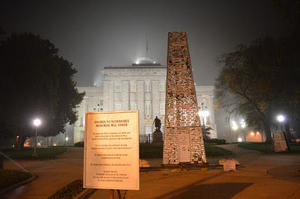 The Eisenhower Chapter, (157) hosted a Armistice Day “Eleventh Hour” Memorial Service with Bell Ringing and Inscription of Memorial Plaques to Veterans and Victims of War from Around the World.  at the N.C. State Capitol, South Patio, Fayetteville and W. Morgan St, Raleigh, NC at Swords to Plowshares Memorial Belltower and “Letters to Vietnam Wall” mobile public history installation.

Speakers:Sam Winstead, 91 year old USMC WWII combat veteran, founder of Americans For Peace who has completed four 350 mile bicycle rides from Raleigh to D.C. for Peace (last two times with Belltower in advance); Roger Ehrlich, co-creator of Swords to Plowshares Belltower; Ahmed Saleem, founder of Films For World Peace; Veterans For Peace and other representatives of Christian, Jewish, Muslim, and other faiths, as well as non-religious people.(All will share how they have suffered from war and are working to prevent future trauma by redirecting human and material resources towards lasting peace and prosperity.)

Why/Background:In a world weary of war, and of divisive election-year rhetoric, people who hunger for healing have been called to the touring Belltower to add inscriptions to bear witness to how they have suffered from war, and share their visions of how we can “beat swords into plowshares.” The door of the Belltower is a replica of the bronze door on the WWI-era Belltower at NC State University. Since it's Memorial Day 2014 dedication at NCSU, visitors have included many homeless veterans, friends and family of soldiers and civilians who have been killed or taken their own lives through suicide, and others from many nations who are still suffering the effects of war. They have shared their stories, added intimate personal inscriptions to windblown aluminum plaques (made from recycled aluminum cans), rung the bell, and many times left with tears in their eyes, but renewed hope in their hearts. The 24-foot-tall tower has travelled twice to Washington, D.C. in advance of “Sam's Ride for Peace,” a 350 mile annual bicycle ride from Raleigh to DC led by 91-year-old USMC combat vet Sam Winstead. In D.C. it has stood near the Lincoln and Vietnam Memorials. Thousands of visitors from around the world have learned about Memorial Belltower at NCSU (and the fact that while wars have raged, it still has not been completed with real bells.)

Armistice Day History: Almost a hundred years ago the world celebrated peace as a universal principal.  The first World War had just ended and nations mourning their dead collectively called for an end to all wars.  Armistice Day was born and was designated as  “a day to be dedicated to the cause of world peace and to be thereafter celebrated." Bells were rung in public squares to mourn ALL the dead and wounded and in hopes (as reflected in the “Swords to Plowshares” words on the Memorial Belltower at NCSU) that international efforts at disarmament would succeed, result in economic and physical security for all, and prevent future waste and trauma from war. During the cold war, the U.S. Congress decided to rebrand November 11 as Veterans Day.

Veterans For Peace chapters around the country and the world are working to bring back the original meaning of Armistice Day. Treating ALL the dead and wounded as OUR dead and wounded, as tragic human losses, is more honest and may help heal the 'moral injuries' of war from which we all suffer and which contribute to the high rate of veteran suicide. NC veteran of the Iraq and Afghanistan wars veteran Matt Hoh , who was keeping vigil at the Belltower at the Raleigh Capitol earlier this week will be in London observing Armistice Day with Veterans For Peace, United Kingdom. Swords to Plowshares Belltower recently received a small grant to replicate the touring Belltower and with further support hope to continue to build and expand the public history project nationally and internationally at least through the 2019 Centennial of Armistice Day.