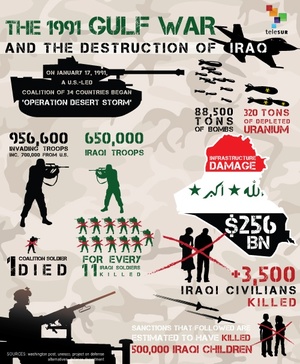 People should not be fooled by the branding “1st Gulf War/2nd Gulf War/Iraq War” since what is going on today is the extension of that war and part of larger strategy to control the region, says Michael McPhearson, veteran of the 1st Gulf War.

The US is marking the 25th anniversary since the end of the 1st Gulf War which was triggered by Iraq's invasion of Kuwait.

Operation Desert Storm began in January 1991 with a crushing air campaign. The war was deemed a huge success for American forces that managed to restore its post-Vietnam image with technological might. However, since then Iraq has become a permanent trouble spot for the US.

At the end of the 90s, Washington launched a swift bombing campaign against Saddam Hussain's government. Five years later US-led forces invaded Iraq to topple the regime staying there for seven more years to fight the insurgency.

The continuing war and power vacuum paved the way for the rise of self-proclaimed Islamic State in 2014, leading to a new military intervention in form of coalition airstrikes.

Michael McPhearson, a veteran of the 1st Gulf War, says many didn’t believe that the original goal of the 1991 operation was to bring peace to the region, adding that the US has no intention of leaving the troubled region.

“I was there we had conversations about why we were there and a number of us understood that big part of the reason we were there was to make sure that there is access to the oil that was in the region,” McPhearson, an anti-war activist and executive director of Veterans For Peace, told RT.

“We also understood that another big reason we were there was try to control Saddam Hussein. So, in terms of peace I guess it depends on how you look at what peace means. But even at that time I believed in peace, I thought war was unnecessary evil,” he said.

McPhearson said he understood that US foreign policy was aimed at gaining control over “access for what the US wants to see happen in the world.”

“I just didn’t realize to what extent US foreign policy would go to control things,” he added.

Commenting on the remembrance of the end of the war, McPhearson said: “That ground and air campaign was the first campaign of the current conflict that is going on there now with the US still involved; we’ve got troops on the ground, at least Special Forces since that time. We’ve had major forces in the region, in Saudi Arabia and other places. So, the biggest outcome from that war is that the US never left and there is no intention to leave… “

“The second one was to show US equipment supremacy over Soviet equipment. So, by defeating Saddam Hussein’s army very handily the US showed that US weapons, tactics and military were supreme in terms of going to war,” he said.

He thinks “it is the lesson in many ways well learned by major powers and certainly by insurgency powers or forces… because people are not trying to fight US in more conventional type of way, they are using other tactics.”

In his opinion, what we see going on today is just an extension of that war and people “should not be fooled by the branding that being done: First Gulf war/Second Gulf War/Iraq War because it is just the part of the larger strategy to control the region.”

The war began with the Iraqi army’s invasion of Kuwait in August 1990. That was followed by US-led coalition fight against Saddam Hussein’s army.

“It wasn’t a point of no-return, it was a decision and everything that is being done in the region is a decision to continue to go along the same track,” he said.

“We need to stop looking for our interests and think about the interests of the average person on the ground. And the people with the resources around the world need to invest in people… because people want food, education and they want to see a bright future. So, even the people in ISIS are trying to create a future for themselves. That’s the problem here,” he added.