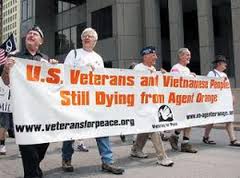 The war in Vietnam resulted in the deaths of more than 58,000 Americans and more than 3 million Vietnamese. Twenty years ago, the United States and Vietnam normalized diplomatic relations in an effort to put the terrible legacy of the war behind them. But for the survivors -- both Vietnamese and American -- the war continues. About 5 million Vietnamese and many U.S. and allied soldiers were exposed to the toxic chemical dioxin from the spraying of Agent Orange. Many of them and their progeny continue to suffer its poisonous effects.

Agent Orange was a chemical, herbicidal weapon sprayed over 12 percent of Vietnam by the U.S. military from 1961 to 1971. The dioxin present in Agent Orange is one of the most toxic chemicals known to humanity.

Those exposed to Agent Orange during the war often have children and grandchildren with serious illnesses and disabilities. The international scientific community has identified an association between exposure to Agent Orange and some forms of cancers, reproductive abnormalities, immune and endocrine deficiencies and nervous system damage. Second- and third-generation victims continue to be born in Vietnam as well as to U.S. veterans and Vietnamese-Americans in this country.

There are 28 "hot spots" in Vietnam still contaminated by dioxin. These hot spots still affect the people who live there and eat the crops, land animals and fish.

Representatives of the Vietnam Association for the Victims of Agent Orange/Dioxin (VAVA) have arrived in the U.S. to mark the official launch of HR 2114 on Thursday. VAVA is an organization of more than 365,000 Agent Orange victims and activists that works to achieve justice for the victims throughout the world.

One member of the VAVA delegation is Tran Thi Hoàn. Her mother was exposed to Agent Orange from a barrel of the chemical buried in her land during the war. Born without legs and with a seriously atrophied hand, Hoàn grew up in Peace Village II, the Agent Orange center at T? D? Hospital, Ho Chi Minh City. Hoàn is a college graduate and currently works as a computer science professional at the hospital.

In the U.S., VAVA's sister organization, the Vietnam Agent Orange Relief & Responsibility Campaign (VAORRC), is educating the public about the ongoing problems caused by spraying Agent Orange in Vietnam and working to pass legislation to remedy these problems. VAORRC believes that the U.S. and chemical manufacturers such as Dow and Monsanto must take responsibility for the use of these chemicals to redress the harm they have caused and to heal the wounds of war. VAVA advocates for and provides assistance to victims in Vietnam, but Agent Orange victims need even more help. Through the work of activists in the U.S., Vietnam and internationally, the U.S. government has allocated some money for the cleanup of one hot spot, but has done little to alleviate the suffering of Agent Orange victims in Vietnam or to clean up the remaining 27 hot spots.

The use of Agent Orange in Vietnam constituted prohibited chemical warfare, amounting to a war crime. Yet the U.S. is still using chemical weapons, including white phosphorus gas, in its wars abroad. In addition to taking responsibility for and rendering assistance to Agent Orange victims, the U.S. government must also provide compensation to victims of recent and current wars who suffer from exposure to chemicals used by its military.

● Clean up the lands and restore ecosystems contaminated by Agent Orange/dioxin in Vietnam.

● Conduct research into the health effects of Agent Orange/dioxin in the U.S. and Vietnam.
HR 2114 should be enacted into law.

The refusal of the U.S. government to compensate the Vietnamese and U.S. victims of its chemical warfare would set a negative precedent for Iraq and Afghanistan veterans who need similar help.

Marjorie Cohn is a professor at Thomas Jefferson School of Law, former president of the National Lawyers Guild, and deputy secretary general of the International Association of Democratic Lawyers. A veteran of the Stanford antiwar movement, she is on the National Advisory Board of Veterans for Peace, and is co-coordinator of the Vietnam Agent Orange Relief and Responsibility Campaign. See Marjorie's blog.