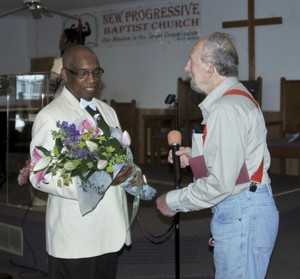 Three members of Veterans For Peace went to services at the mostly African-American New Progressive Baptist Church in Kingston, N.Y., June 21 to express sympathy and solidarity in the wake of the racist shootings at the  Emanuel African Methodist Episcopal Church in Charleston, S.C., June 17.

Woodstock, N.Y., VFP President Jay Wenk presented flowers and a card with VFP's statement on the killings to "NewPro" pastor Rev. Dr. G. Modele Clarke, who said, "You have no idea how moving that is." As Jay noted that the bouquet was in sympathy for the massacre, a member of the congregation asked, "The one in South Carolina?" Jay's response, "All of them," was met with shouts of approval.

Rev. Clarke's call to worship that morning stressed turning anger at the killings at "Mother Emanuel" into concrete action, saying "Talk is cheap … [you have to] put some feet on the talk, some feet on the faith." When he asked the congregation if they were familiar with the controversy about the Confederate flag flying over the South Carolina statehouse, Rita Worthington spoke from the pews, saying "I understand why it is a flag of legacy for some, but for us it is a legacy of hate … a legacy of white supremacy."

The VFP members got an enthusiastic welcome from the regular church-goers, who urged them to come back any time. "Your message about the importance of action really resonated with us," VFP National Board member Tarak Kauff told Rev Clarke, who uses his post to promote social justice, in particular prison outreach and street ministry.