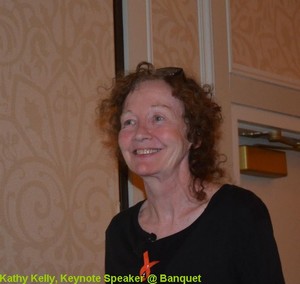 On December 10, International Human Rights Day, federal Magistrate Matt Whitworth sentenced me to three months in prison for having crossed the line at a military base that wages drone warfare. The punishment for our attempt to speak on behalf of trapped and desperate people, abroad, will be an opportunity to speak with people trapped by prisons and impoverishment here in the U.S.

Our trial was based on a trespass charge incurred on June 1, 2014.  Georgia Walker and I were immediately arrested when we stepped onto Missouri’s Whiteman Air Force where pilots fly weaponized drones over Afghanistan and other countries.  We carried a loaf of bread and a letter for Brig Gen. Glen D. Van Herck.  In court, we testified that we hadn’t acted with criminal intent but had, rather, exercised our First Amendment right (and responsibility) to assemble peaceably for redress of grievance.

A group of Afghan friends had entrusted me with a simple message, their grievance, which they couldn’t personally deliver:  please stop killing us.

I knew that people I’ve lived with, striving to end wars even as their communities were bombed by drone aircraft, would understand the symbolism of asking to break bread with the base commander.

Judge Whitworth said he understood that we oppose war, but he could recommend over 100 better ways to make our point that wouldn’t be breaking the law.

The prosecution recommended the maximum six month sentence.  “Ms. Kelly needs to be rehabilitated,” said an earnest young military lawyer. The judge paged through a four page summary of past convictions and agreed that I hadn’t yet learned not to break the law.

What I’ve learned from past experiences in prison is that the criminal justice system uses prison as a weapon against defendants who often have next to no resources to defend themselves.  A prosecutor can threaten a defendant with an onerously long prison sentence along with heavy fines if the defendant doesn’t agree to plea bargain.

In his article “Why Innocent People Plead Guilty,” Jed S. Rakoff draws attention to the institution of plea bargaining which now ensures that less than 3% of federal cases go to trial at all.  “Of the 2.2 million U.S. people now in prison,” Rakoff writes, “well over 2 million are there as a result of plea bargains dictated by the government’s prosecutors, who effectively dictate the sentence as well.”

It’s one thing to read about the shameful racism and discrimination of the U.S.  criminal justice system. It’s quite another to sit next to a woman who is facing ten or more years in prison, isolated from children she has not held in years, and to learn from her about the circumstances that led to her imprisonment.

Many women prisoners, unable to find decent jobs in the regular economy, turn to the underground economy. Distant relatives of mine knew plenty about such an economy several generations ago. They couldn’t get work, as Irish immigrants, and so they got into the bootlegging business when alcohol was prohibited. But no one sent them to prison for 10 years if they were caught.

Women prisoners may feel waves of guilt, remorse, defiance, and despair. In spite of facing extremely harsh punishment, harsh emotions, and traumatic isolation, most of the women I’ve met in prison have shown extraordinary strength of character.

When I was in Pekin Prison, we would routinely see young men, shackled and handcuffed, shuffling off of the bus to spend their first day in their medium-high security prison next door.  The median sentence there was 27 years. We knew they’d be old men, many of them grandfathers, by the time they walked out again.

The U.S. is the undisputed world leader in incarceration, as it is the world leader in military dominance.  Only one in 28 of drone victims are the intended, guilty or innocent, targets.   One third of women in prison worldwide, are, at this moment, in U.S. prisons.  The crimes that most threaten the safety and livelihood of people in the U.S. of course remain the crimes of the powerful, of the corporations that taint our skies with carbon and acid rainfall, peddle weapons  around an already suffering globe,  shut down factories and whole economies in pursuit of quick wealth, and send our young people to war.

Chief Executive Officers of major corporations that produce products inimical to human survival will most likely never be charged much less convicted of any crime.  I don’t want to see them jailed.  I do want to see them rehabilitated

Each time I’ve left a U.S. prison, I’ve felt as though I was leaving the scene of a crime. When I return to the U.S. from sites of our war making, abroad, I feel the same way. Emerging back into the regular world seems tantamount to accepting a contract, pledging to forget the punishments we visit on impoverished people.  I’m invited to forget about the people still trapped inside nightmare worlds we have made for them.

On January 23, 2015, when I report to whichever prison the Bureau of Prisons selects, I’ll have a short time to reconnect with the reality endured by incarcerated people.  It’s not the rehabilitation the prosecutor and judge had in mind, but it will help me be a more empathic and mindful abolitionist, intent on ending all wars.