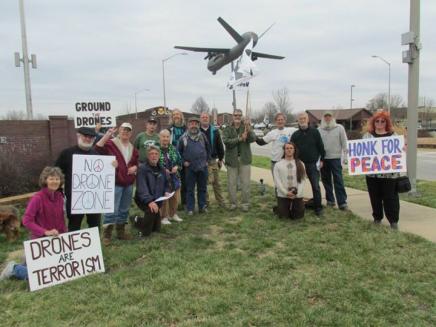 Join us March 4-6, 2015 at Creech Drone Base, Nevada for a national mobilization to shut down assassin drone operations in Afghanistan, Pakistan and Yemen. Sponsored by CODEPINK: Women for Peace, Nevada Desert Experience, Veterans for Peace and Voices for Creative Nonviolence!

In 2005, Creech Air Force Base was home to the first MQ-1 Predator drone squadron in the Air Force Special Operations Command, followed a year later by the first Reaper squadron. In 2013 it was revealed that the CIA drone assassination program, officially a separate operation from the Air Force’s, has been piloted by military personnel from Creech’s super-secret Squadron 17 all along. Since 2009, the drone program has proliferated to bases around the U.S. and abroad and the base at Creech has also mushroomed along with its mission. Creech is where the killer drone program started- it is where we will end it.

Five years ago, former U.S. Attorney General Ramsey Clark testified at the trial of the “Creech 14,” the first Americans prosecuted for trespass at a drone base, that “to have a baby burn to death because of a ‘no trespass sign’ would be poor public policy to put it mildly.” In a time of burning children, the “no trespassing” signs attached to the fences that protect the crimes perpetrated with drones and other instruments of terror are not legitimate and they do not command our obedience.

Join us for three days of resistance and celebration in the Nevada desert.