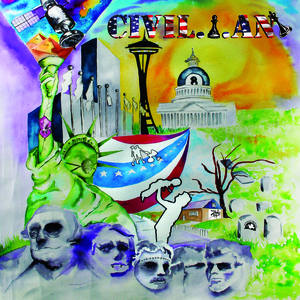 NOVEMBER 24, 2014 (WHITE PLAINS, NY) -- Megaciph, pronounced (Mega-psy-ph), describes himself as an, "Emcee, Writer, Teacher, Poet," and his next full length album titled CIVIL.i.AM is set for release DECEMBER 20, 2014.  An independent artist, Megaciph has previously self released two full length albums; The Graduate Program (2006), and Migration of the Soul'd Kind (2011), his music is available for purchase exclusively on his website www.megaciph.com or Bandcamp page at http://milesmegaciph.bandcamp.com. Megaciph, his name also an acronym for Mental Energies Gather And Circulate In Positive Harmony, has partnered with the Anti-war Nonprofit organization Veterans For Peace to donate 100% of CIVIL.i.AM album sales to help their mission. Mega, The Marine Corps veteran says, "I cannot justify raising my son in a world I feel could be better if I'm not doing the work to make it better." CIVIL.i.AM is an album that tells very personal stories of Mega's life from before he enlisted, while serving in the armed forces, and the years immediately following his Other Than Honorable discharge from the United States Marine Corps.

With just four months remaining on his four year contract in the Marines Megaciph was given an Other Than Honorable discharge for smoking cannabis. He had never smoked prior to his time in the fleet; the term used to describe Marines daily work life beyond boot camp and MOS school (Military Occupational School). Megaciph describes the fleet as, "a breeding ground for alcoholics, violent offenders, racists, homophobes, drug dealers and addicts, and one of the best experiences of my life." On the songs, Best Days Of My Life, and Promise Megaciph delivers graphically detailed accounts of his experiences both during and immediately after service. On the song, My All he recalls facing death at gunpoint and morphs it into a story about the fragility of life and learning to appreciate it's blessings. The album, CIVIL.i.AM features fellow veterans; AtLas (United States Air Force), and Guy Ron Solero Vanterpool (United States Army), and its overall message is to bring awareness to the true costs of war and inspire people to mobilize and work for peace.

Megaciph is a writer, and a social entrepreneur. In 2003 Megaciph recorded on his first full length album, First Orbit, with the Atlanta based band The Twelfth Planet. In 2006 he self published his first solo album, The Graduate Program. The following year, while living in NY, he commuted between NY and Atlanta to perform with Aqua-Fi Project; the three man band made it to the Atlanta finals of the international Emergenza festival competitions. In 2011 he self published his sophomore solo album, Migration of the Soul’d Kind. From November 2010 until March 2013 Megaciph conceived and self promoted events throughout NYC that provided hundreds of artists with viable platforms to hone and showcase their craft. Megaciph holds a BS in English with a minor in Music Management from Georgia State University (2006) and a MS in nonprofit management from The New School University (2010). He is the founder of ThatsGoodness Entertainment; a not for profit record label with a focus on human rights, incorporated in NYS in 2010.