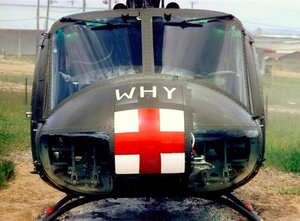 This was a Medevac helicopter in my
military unit in An Khe, Vietnam.
By 1970-71, most U.S. soldiers in
Vietnam were asking:
Why are we still in Vietnam?
Why were we ever here in the first place.


Shortly before I left Vietnam, I was
called out in the middle of the night,
because an American soldier had shot
himself in the head with his M-16.
When I entered the tent, he had blown
the back of his head out with one tumbling
M-16 round.
There was blood everywhere, especially on
my uniform.
He was a heroin addict, who was getting ready
to fly home after his one year tour of duty.
Or, should I say one year tour of insanity.
After all, this was a Wall Street War.
So, you might say he blew his betrayal brains out,
like so many thousands of other soldiers and
Vietnam veterans did when they came back
to a home that no longer existed.
To me, this suicide was a metaphor for the entire
Vietnam War.

Here is a synopsis for the war in Vietnam,
what the U.S. Empire did to Asian people:
You do not bring the enemy to the peace table
by just killing military combatants.
You ultimately bring the enemy to the peace
table by killing innocent civilians.
They ARE military targets.
This strategy is as old as warfare itself.
This is the unspeakable truth that nearly
every American would perceive as preposterous.
The truth is always lethal when it
ambushes your belief system.
But, the macabre part of all this, is the realization
that this WHY Helicopter is now flying all over the
Middle East scattering ashes from the Vietnam War.
Mike Hastie
Army Medic Vietnam
September 15, 2014

This poetry and photograph is dedicated
to the youth of America, who absolutely
have to know the truth. When the rich
and the privileged in America start sending
their kids to war, I'll start believing in noble
causes.