The writer, Jason Cardenas is a US Army combat veteran, having served in the Iraq War. He is a social worker, and peace activist with an active membership in Veterans for Peace. He currently blogs about war and it’s negative effects, and has recently completed a short documentary titled “When Will War End?”

Some of the most atrocious products of war – aside from chaos and violence – are the lasting effects post-war. Violence may quell, some order may be reestablished, and although vestiges of warfare may remain (from war monuments to days of remembrance), other deadly remnants of it’s destructive path may persist.

There is one silent and invisible enemy in particular, one that will continue to wage war clandestinely and proceed to obliterate ecosystems – water, food, weather patterns etc. – and people. For almost countless years, this malignant force will resume annihilating its victims and punish them with irreversible pestilence, chronic disfigurements, and shortened lifespans.

The enemy to which I’m referring is depleted uranium (DU).

For years DU has been used in various forms of US weaponry. The design of specific weaponry, which utilizes DU, is intended to cause the most effective and maximal damage – and this substance definitely performs its specific duty. DU is heavily used for its penetration capacity, as well as its ability to fortify heavy armory, such as Abrams tanks. 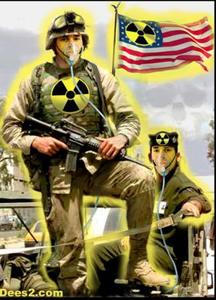 Here are DUs properties, according to Maeda, Saruta, & Inamori:

1) Depleted uranium, because of its very heavy density (1.7 times of lead, 2.5 times of iron) and solidity, when used to tip munitions, increases the penetration power of various munitions projectiles, and exhibits tremendous capacity to penetrate through thick concrete and armor.

2) Even while there are no explosives inside some munitions, it explodes upon impact, and the capacity to kill and injure the enemy is high, due to the extreme temperatures of the burning munitions projectiles.

3) Acquisition of DU is relatively inexpensive because its raw materials are essentially radioactive wastes.

DU is usually inhaled after the munitions deposits have been released after impact. The radioactive substance(s) attach themselves to a person’s respiratory system and do not dissolve in the bloodstream. Therefore, excessive radioactive material is exposed to other organs within the human body. The consequences are extremely harmful and result in numerous health hazards, congenital disorders and defects, various forms of cancer(s) – the list continues.

Not only during the war, but also after the war, and an unimaginable length of time of 4.5 billion years hereafter, the people of Iraq will have to bear the burden of living in this vast polluted land and learn how to survive with this grim reality.[1] 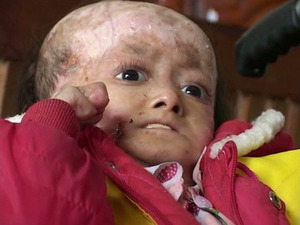 One of the most affected populations are the Iraqi people, especially in the areas most devastated by the Gulf Wars and most recent Iraq Wars. Veterans of these wars have also shown an increase in rates of various cancers from direct exposure. 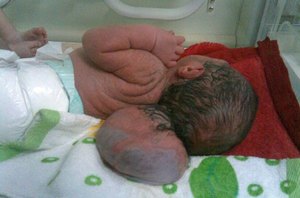 Below is a video depicting the horrific birth defects as a result of DU exposure (WARNING EXTREMELY GRAPHIC):

According to Dr. Souad N. Al-Azzawi;

The American and British occupation forces are totally responsible for:

1-Forbidding any release of statistics related to civilian casualties after the occupation.

2-Refusal to clean up contaminated areas.

3-Depriving international agencies and Iraqi researchers the right to conduct full (DU) related exploration programs by USA occupation forces to prevent further damages is the best evidence that these forces are covering up their certain conclusive evidence of the harmful health impacts of DU.

Here’s a great discussion about the lasting effects and responsible entities:

These reports are credible sources and I highly encourage, for those who care, to click on the highlighted links and read the reports for yourselves. These sources are, of course, not CNN or any biased military or news bits – they are academically salient. There are numerous veteran-led organizations, such as The Justice for Fallujah Project, who highlight these devastating issues and challenge the American and Western public to research, and invest time and energy into advocating for solutions to address these problems – please listen to them, they were there!

Education is important. So it’s imperative that we continue to look beyond what is broadly presented to us – it’s time to question why we continue to utilize these destructive means for geopolitical interests and causes. When will this end?