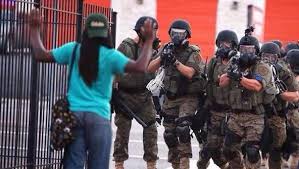 While I am not a member of the law enforcement community I do train police officers and law enforcement personnel in CA on interacting with and deescalating situations with veterans in crisis. I hope you will take my advice from the same place those I train here take my expertise.

The tactics you are using are not deescalating the crisis in #Ferguson. In fact many of the tactics you are using are escalating the situation. You are dealing with a lot of trauma in Ferguson right now and you need to view the way people are reacting to you through the lens of trauma informed care. A man was killed and that is going to cause a community trauma, not to mention the micro & macro aggressions black people deal with on a daily basis.

Now that we are using a trauma informed lens let's look at just a few specifics that you are doing that are escalating the situation.

1- Pointing loaded weapons (be they lethal or less than lethal) at people never deescalates a situation. This will always make people feel fear and thus escalate the situation. In fact the more you can police without weapons the more the community can build trust and get to know you as an equal.

2- Kettling protesters makes people feel trapped and does not allow people to feel heard. When a community feels an injustice protest is a very important part of the justice process so when you do things like kettling in order to break up protests you make it feel as though you want people to shut up and go home not to be a part of the community at large. Instead work with protest leaders to ensure that space is always available to protest even when you disagree with the protest (Police seem to do this well with the KKK).

3- Shouting orders that are unquestionable again silence and escalate situations. Rather try to dialog with leaders so that you know why people are doing what they are doing rather than just trying to shut people down. Talking calmly to people and interacting as a person can help deescalate quickly. Give your name and rank to people you talk with and try to get theirs too, this should include your first name.

4- Shutting out the press will always escalate situations where people are looking for more information. Let the press in and lift the ban on air coverage (as this too escalates the situation and feels like a war zone). The more people can see you do your job the better a job you will do and the more people will trust your work.

5- Be truthful even when it makes you look bad. In politics there is a rule that the cover up is always worse then the crime. You have been caught giving out bad or misleading information and this creates mistrust, thereby escalating the situation.