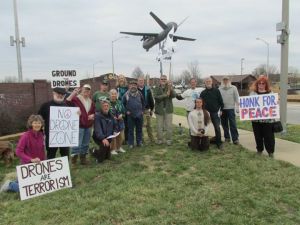 Noting the name Whiteman Air Force Base, former CIA intelligence analyst Ray McGovern in his talk said, "When B2 bombers flew out of here to Afghanistan and Iraq, they weren't killing people who looked like us (white), but who were what the airmen were taught to call 'sand niggers' or 'towel-heads.' White-man is killing brown, black, and other men, women, and children who don't look like us. White-man Air Force Base is a reflection of the American original sin, racism."

McGovern recalled that President Obama on May 17, 2013, said he wished he could stop drone strikes. "Gimme a break," said McGovern. "The president could stop the strikes if he had the backbone."

Acknowledging that he was in the Bible Belt, McGovern assailed the silence of the churches about drones. "If the church does not speak out against this wanton slaughter against black and brown people, then the church is the same institution Jesus spoke out against and got killed for doing it."McGovern, after being introduced by Brian Terrell, said, "It's not often I'm introduced by a prophet!" McGovern thanked Terrell for serving six months in a federal prison camp for his 2012 protest at Whiteman AFB--the longest sentence any drone resister has received.Terrell, a co-coordinator of Voices for Creative Nonviolence, speaking during the rally, asked whether the resisters knew what "Spirit Gate" meant. The name evokes not the third person of the Holy Trinity--the Holy Spirit, not a "higher power," not a spirit that animates and gives life, nor even the Higgs-Bosson particle. "Spirit Gate" and, even more pointedly, the "Spirit Chapel" that can be seen just inside the gate, are named for the nickname the Air Force gives to the B2 Stealth Bomber nestled at Whiteman AFB. The Air Force calls these weapons of mass destruction "Spirit Stealth Bombers."

"This is the 'spirit' that is evoked and worshiped here at Whiteman," said Terrell, co-founder of Strangers and Guests Catholic Worker Farm in Maloy, Iowa. "When we were here for the first Trifecta Resista action in 2012, Whiteman personnel were using Predator drones. Now we have Reaper drones--think Grim Reaper--and they are armed with 'Hellfire' missiles. These terms--Spirit, Reaper, Hellfire--are theological terms and, as used here at Whiteman, are shear blasphemy!"

Terrell noted his best times during his six-months imprisonment in South Dakota were spent walking a large circle path outside in the cold, even in minus-40-degree wind chill, times when no one else was out walking, unlike warm days when the path became Grand Central Station. He called his prison time "highly productive" for thinking/praying/planning. He later asked whether any locals had come forward to say they will do civil resistance during the May 30-June 1 Trifecta Resista that will return to Whiteman AFB. The answer: not yet. For info on that resistance weekend, see www.PeaceWorksKC.org.

Rally organizer Jeff Stack of Columbia, Mo., head of the Mid-MO Fellowship of Reconciliation, asked protester Jo Ann Witt of Kansas City to say a few words about why she came to the rally. "Because so many innocent civilians have been killed by the drones," said Witt, moved to tears.
McGovern thanked Witt for her tears, noting they were the humane response to the horror of drone warfare that the U.S. has unleashed.

Tamara Severns of PeaceWorks-KC arrested by surprise at drone protest

Tamara Severns of Kansas City, Mo., was arrested unexpectedly during an April 6 protest of drone warfare at Whiteman Air Force Base, near Knob Noster, Mo. A member of the PeaceWorks, Kansas City, Board of Directors and a Co-member of the Loretto Community, Tamara was walking toward the Visitors' Center to use the bathroom. She and other resisters had used those facilities with no problem during about five earlier protests. On April 6, Tamara and several others had arrived at the base entry after authorities had warned the resisters not to step across the white line on the entry road. Unaware that "the rules" had changed, Tamara crossed the line to go toward the Visitors' Center, was taken into custody with no warning, and was handcuffed, searched, and detained on the base about an hour."The officer said, 'Turn around. You're being arrested,' and clamped the metal handcuffs on my wrists," Tamara said after her release.

"They gave me no warning to leave the property." Her wrists still showed red marks two hours after the handcuffs were removed. A male officer twisted the chain between her handcuffs to direct her where to walk and to hurt her, Tamara said. "I was scared because he was being so rough."Tamara received a U.S. District Court Violation Notice for "trespassing on military installation" and expects to be summoned to court. Brian Terrell of Maloy, Iowa, a speaker at the rally, said later he hoped Tamara would not be taken to court because no date or location was listed on the notice.

Tamara fears she will receive a court date because the officers told her she would, and it says it on the ticket.One complicating factor: Officer John Sullivan, who was debriefing the protesters, had gotten inaccurate information from someone else, said Tamara. Sullivan told protest organizer Jeff Stack that another security officer said Tamara had tried to go around the driver's side of the police car toward the Visitor's Center after being advised not to. The truth, said Tamara, was that she never left the sidewalk on the right side of the car and no one said anything except "You're being arrested."

Protester Vicke Hooper Kepling, on her Facebook page April 7, wrote this about Tamara: "She walked to the bathrooms ... like she had done at other protests ... AND GOT TICKETED (detained, felt up, the works).

I said "ticketed," but I believe she was actually arrested. I woke up thinking about it. She may face the same fate as the three who intentionally crossed two years ago. One actually did six months in
federal prison, and the other got five years probation (reduced to one). I wasn't putting the same weight on it because of her intention (and that she and others had used the restrooms before). But after reconsideration, I bet it's the same."Former CIA intelligence analyst Ray McGovern, who spoke during the rally, said afterwards, "It's so obvious Tamara's civil rights under the First Amendment have been violated. Somebody said to this officer, 'Make an example of Tamara and brutalize her,' and he did." 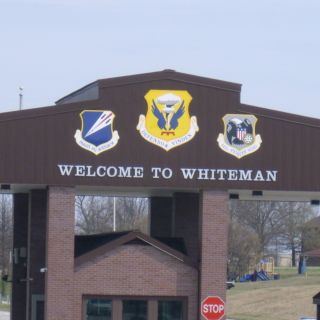 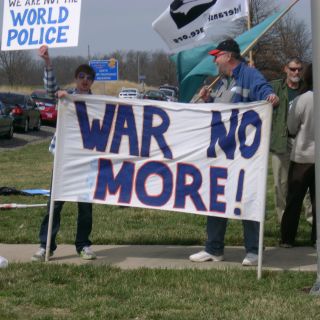 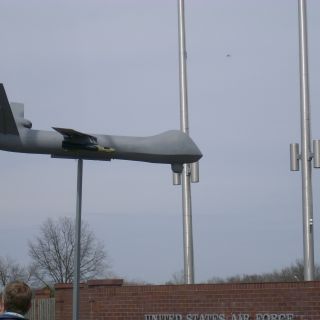 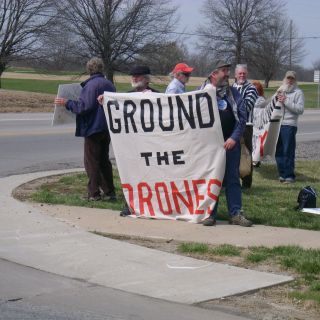 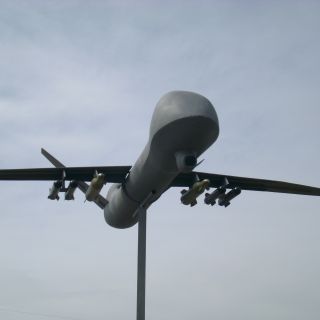 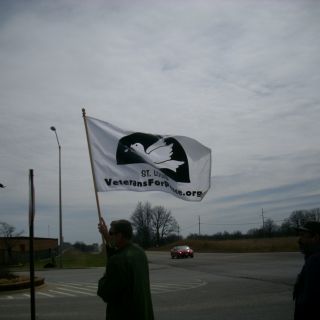 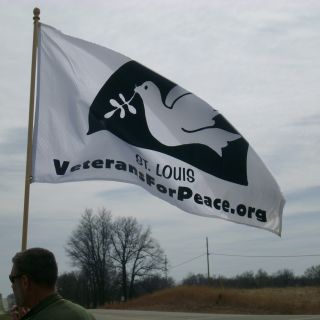 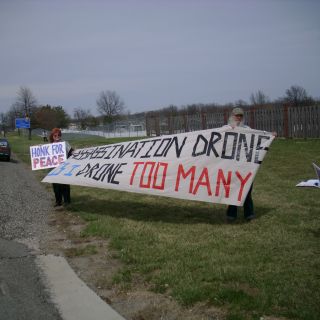 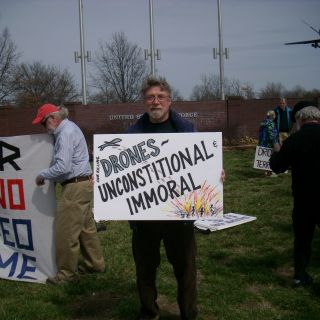 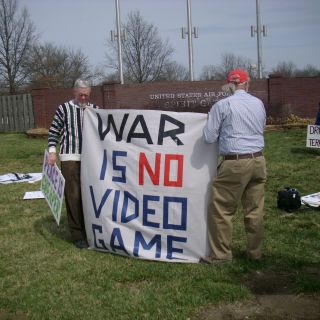 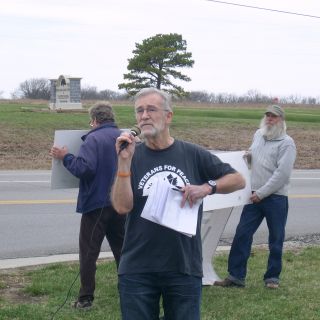 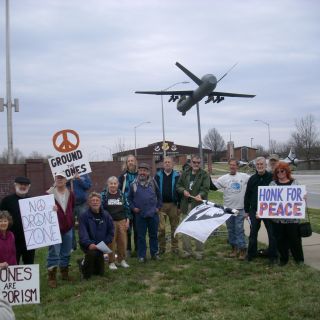 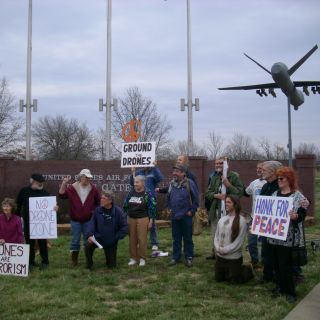