Ellen was VFP's representative at the first public event of Combatants for Peace in 2006. In this piece Ellen talks about the first meeting. 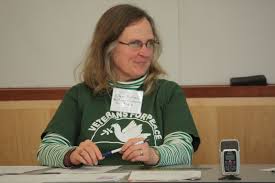 I was greatly honored to be able to represent Veterans for Peace at the first public event of the new peace organization Combatants for Peace, Palestinian and Israeli former fighters who have renounced violence and now work together for peace and justice. They have met in secret for a year, their membership growing to 120 brave enough to meet former enemies and describe their previous violence and what their turning points were. Now they have come forward to speak out together about the futility of trying to solve their conflict with more bloodshed. Hundreds of members and supporters, a bigger crowd than expected, gathered on 10 April in the Palestinian village of Anata near Jerusalem, in the shadow of the apartheid wall, to meet and congratulate the brave former fighters and hear some of their personal stories.

This trip happened because one of the CFP organizers, Yonatan Shapira, a former elite Israeli Defense Forces Black Hawk helicopter pilot, had met Veterans for Peace President Dave Cline and told him VFP was invited to send a representative to the launching gathering. When Dave
mentioned that to us on the VFP Board, I leapt at the opportunity. I have visited Palestine and Israel several times before, and was glad to return. But even more compelling was my desire to support former fighters speaking out. I am more and more convinced that those who have most directly practiced violence must lead society toward nonviolence. It is harder for civilians to maintain intractible belligerence when those who have previously "looked at one another only through weapon sights" (from the CFP website) embrace nonviolence and reconciliation.
I was impressed that the Liberation Gathering ceremony was graced by the presence of 6 or 8 European Parliamentarians. These included Women in Black co-founder and Italian Parliament member Luisa Morgantini, who spoke to support the new organization, noting that Italian elections were happening but she chose to be in Palestine. Germany, Ireland, Spain, Britain, and several other countries were represented. I spoke to the German representative, praising him for his
presence. He noted he was of Jewish heritage, but said, "I know the terrible situation of the Palestinians". I told him I would have fainted in surprised delight if a US legislator had attended.
During the gathering the Israeli Defense Forces set off both a stun grenade, which fortunately exploded in the air nearby, not in the schoolyard where we were gathered, and later tear gas, of which I got a good whiff. The route of the 25-foot tall separation, or apartheid, wall Israel is building on Palestinian land ran right behind the schoolyard which hosted the event, and of course the presence of hundreds of people, especially foreign witnesses, made the soldiers nervous, and they responded predictably. Luisa Morgantini had mentioned that internationals must say to the Israeli government that enough is enough.
Because this trip formed up fairly late, and due to the Passover season travel crunch, I had to stay longer than I had initially intended, a full two weeks. Though I couldn't really afford that much time away from my too-busy schedule, it allowed me to spend time just living with both Palestinians and Israelis, something delegations dashing from appointment to appointment don't get.
My Israeli host, a member of CFP, was also a wonderful musician. He took me to a gig at a reunion of an oceanographic institute class. I had close to fly-on-the-wall status as a woman the age of their mothers. Of course I couldn't speak their language, but watching the exuberance of those beautiful young people as they met old friends and sang along to the music made me feel what I know philosophically but needed to get emotionally. Individual Israelis are just as likeable as the lovely Palestinians I met. I of course sympathize with the underdog in the struggle between the two peoples. But I had been unconsciously condemning Israelis for the sins of their government. It was good to be reminded not to do that.
My host had suffered the impacts of his decision to leave the Israeli Defense Forces. His former girlfriend was an IDF soldier too, and she staunchly believed in the military mission, so naturally their relationship ended. He had cobbled together a livelihood of playing music at family celebrations and community parties, and was also training in medical clowning (clowning for hospital patients), after quitting his respected position as a tank commander in the IDF. His family was fairly supportive, but not all his friends were of course.
My host had family music appointments he could not take me to, so I got to wander around the Tel Aviv area by myself a good bit. He lived on the outskirts of town so I took buses in. I stood with the Tel Aviv Women in Black in their silent Friday noon vigil calling for the end of the occupation. I wore a black VFP shirt, and when we ended the vigil when the hour was up, an elderly woman I
had been on the other end of the banner from asked me what it meant. When I told her about VFP and my military service, she said it reminded her of herself, as a soldier in 1948, and a peace activist now.
The Palestinian CFP contact arranged for me to stay with the family of a young Palestinian woman with whom he works on a community development project. Traveling to their home in Jericho I saw many small Israeli settlements scattered among Bedouin communities, and the
roadsides had been graded for the planned superhighway connecting Jerusalem with the Dead Sea and Amman, Jordan, and further dividing the West Bank. My host family had lived and their parents worked in Saudi Arabia for nearly ten years, but the Gulf War caused their expulsion back
to Palestine in 1991. This kind of further displacement is common in Palestinian lives. I saw busloads of Palestinians flowing into southern Iraq from Kuwait when I traveled there with Brian Willson and other VFPers in the fall of 1991.
I stayed long enough with this family that most of them used me as sounding board for their frustrations at some point. The middle sister apologized that she and her husband were fighting about staying in her parents' relatively safe and quiet home in Jericho, where Israeli harassment is comparatively seldom, or moving back to their own home outside Bethlehem where jobs and opportunities are better but Israeli-imposed curfews and military patrols, and the attendant danger, are common.

The youngest sibling and only brother referred to his generous dinnerplate (this was a well-off family) but still feeling no energy, the malaise of few opportunities and restricted movement. The mother expressed exhaustion caring for her young and rowdy grandchildren, and missing the job she had in Saudi.
I was quite honored that the siblings felt I could handle their grilling me on my last day there about US support for Israeli violence, and why the US public goes along with that. They also appreciatively mentioned Rachel Corrie, the young US woman bulldozed to death by an Israeli soldier. The son-in-law joked afterward as if he were an Al-Jazeera reporter signing off after a tough interview. Both he and Ministry of Health and Sport personnel I met were unable to work due to the funding cutoff of Palestine by almost all previous donor governments after the recent election victory by Hamas.

Many Palestinians, already on the edge financially, face real hardship and hunger if the funding does not resume.

The rate of malnutrition among Palestinian children was high even before the election. It was a tense time for many.

My last night I stayed with another Palestinian CFP member and his family in a village outside Ramallah. This was a smaller, quieter household, where only he spoke English. The two daughters, 5 and 3, were quite shy at first, but the next morning they got rambunctious and showed off for the visitor. The little one began chanting a poem, and my host grinned and said it was a teasing rhyme about Sharon in a diaper. None too considerate of a sick old man, but entirely understandable given Sharon's criminal history toward the Palestinians.
Leaving Palestine that afternoon, I crossed into west Jerusalem at the Qalandiya checkpoint, now a modern and intimidating series of offices and gates and corridors.

On my previous trips it was just a stopping point in the road, where you got out of the Palestinian taxi, passed the soldiers behind concrete barricades, and got an Israeli taxi. I had all my luggage with me, which did not fit through the turnstyles, so I had to ask the soldiers to open the 4 or 5 wheel chair gates for me. I was reminded how harmless white middle-aged women are assumed
to be. Sometimes they were slow to push the gate buttons, but the soldiers never even came out of their offices to talk to me or check my luggage.
It made the hair stand up on the back of my neck to get home and realize I had been within 18 hours and a few hundred yards of the recent suicide bombing at the falafel stand near the bus station in Tel Aviv. I had thought occasionally on the buses about such a possibility, but to actually be so close felt weird. I fear the increased pressure on Palestine will increase these terrible incidents. The slow work by CFPers who now intend to speak with school classes and other groups in pairs of one each, seems far too little in the face of such urgent need. But face-to-face, one-on-one, is how real changes of heart occur. CFP is a small grain of hope in a sea of risk. I am very glad they exist.
I want to thank VFP chapters and individuals who donated to make my trip possible. I will send pictures soon. And I invite you to have me speak and do a slide show. On the eastern seaboard I am happy to just get myself there.

Farther away I need travel assistance. Call or e-mail me to set up a showing.
And check out the Combatants for Peace website "Combatants for Peace" Israeli-Palestinian Liberation, for the media their event generated, some personal stories, and other info.