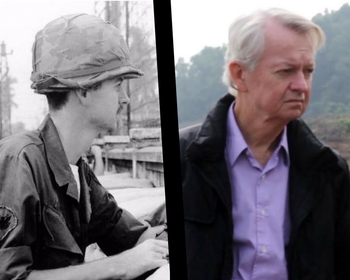 Chuck was born in Anniston, Alabama. He is vice president and a founding member of VFP Chapter 160 in Hanoi, where he has lived since 1995.

A veteran of the Vietnam War, Searcy enlisted in the U.S. Army in 1966, served as an intelligence analyst in Saigon from June 1967 to June 1968, and spent his last year in the Army at U.S. Army Europe headquarters in Heidelberg, Germany.

Searcy is International Advisor for Project RENEW in Quang Tri Province, an initiative with the mission to make Quang Tri safe from the threat of wartime bombs and mines; and to assist families harmed by Agent Orange. Since 1995 Searcy has represented the Vietnam Veterans of America Foundation (VVAF), the Vietnam Veterans Memorial Fund (VVMF), Veterans For Peace (VFP) and other NGOs and affiliated organizations in Vietnam.

A graduate of the University of Georgia, Searcy was co-publisher and editor of a weekly newspaper, The Athens Observer. He was later in charge of public communications at the U.S. Small Business Administration in Washington during the Carter administration, and worked in the U.S. Senate for two years. From 1989 to 1994 Searcy was Executive Director of the Georgia Trial Lawyers Association.

Searcy is active with the the NGO Resource Center in Hanoi, he co-founded the Landmines Working Group, and is co-chair of the Agent Orange Working Group.

Searcy is a recipient of Vietnam’s National Friendship Medal. 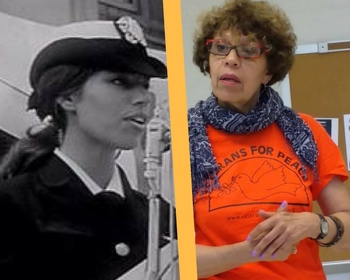 Susan was an active duty Navy nurse (LT.JG) at Oak Knoll Naval Hospital, Oakland, from 1967-69, where she was charge nurse on the wards for wounded returning from Vietnam and trained corpsmen headed for the conflict.

In 1969 Susan was tried and found guilty by general court martial for conduct unbecoming an officer for dropping anti-war leaflets over five military bases in the San Francisco Bay area and wearing her uniform in the GI and Veterans March for Peace, October 12, 1968 in San Francisco.  She was active in the Medical Committee for Human Rights, Medical Aid for Indochina, and the GI coffeehouses.

For 31 years Susan was the executive administrator responsible for the departments of Quality/Risk/Care Management, Regulatory Affairs, and Medical Records at a number of public hospitals in New York City, retiring from Bellevue Hospital Center in 2006.  Susan Schnall has been an Assistant Adjunct Professor, New York University, School of Professional Studies, Healthcare Management for the past 20 years.

In April, 2015 she was awarded an Honorary Doctor of Humanities by Ohio Wesleyan University.  Susan is a member of the core of the Vietnam Agent Orange Relief and Responsibility Campaign, President of the New York City Veterans For Peace, and a member of  Vietnam Veterans Against the War. She organized and led a delegation of Science/Public Health professionals to Vietnam in 2013 to survey the land that had been contaminated by the US use of Agent Orange/dioxin and visit the people who had been harmed by the chemicals. In August, 2016 she presented a paper on the Health Effects on American Service Members who served in Vietnam at an international conference on Agent Orange/dioxin in Hanoi.  For the past several years she has organized scientific panels for presentations about Agent Orange at the American Public Health Association annual meetings. She is a board member of the Institute for Community Living, New York City. 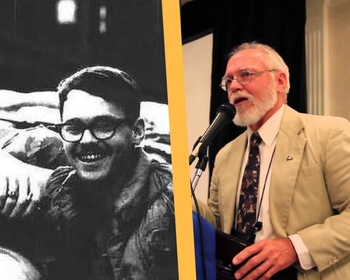 Born in Rochester, NY, 1946.  He has a BSBA Economics from John Carroll University in Cleveland, Ohio in 1968.  He was drafted January, 1969 while an MBA student at Ohio State.

Doug is one of the original founders of Veterans For Peace has served on the VFP national board and lives in Maine. 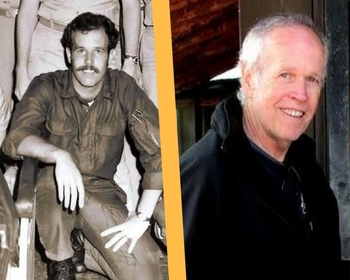 Raised in Rancho Cordova, California, Gene was commissioned at 23 at NAS Pensacola in August 1969, earning his wings in 1970. From October 1971 to July 1972 he was deployed in Vietnam as an Airborne Electronic Warfare Officer with VAQ-135 on the attack carrier CVA-43 (USS Coral Sea).

Gene and his wife, Victoria, raised two sons and eventually settled in Bellingham, Washington in 2004.  They continue to stay active with four grandchildren, peace and justice affinity groups, and organic gardening. 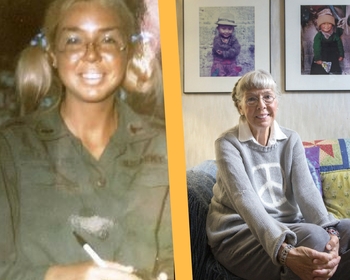 Peggy joined the Army Nurse Corps while a nursing student at Columbia University and served in Vietnam May 1970-71, working at the 67th evacuation hospital in Qui Hnon in the ICU and the 91st evac hospital in Chu Lai, receiving a bronze star.

Peggy became involved in the antiwar movement in San Francisco after her tour of duty and continues this work in Maine as a board member of Veterans For Peace Chapter 001.  She is now nurse practitioner in Portland, ME, working with homeless youth. 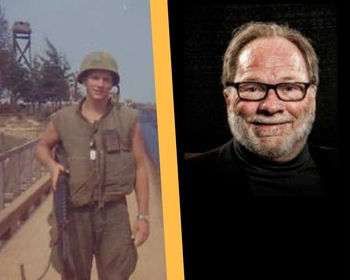 Gary E. May is a retired Emeritus Associate Professor of Social Work from the University of Southern Indiana after teaching there for 22+ years. Previously he worked in Veterans Affairs, disability advocacy and civil rights. He was called upon several times to testify before Congressional committees against the so-called Flag Protection Amendment when Congress was considering it. He remains an advocate for various social justice issues. His book,Ending Disability Discrimination: Strategies for Social Workers,was published in 2005.

Gary holds a Bachelor’s Degree in Sociology from the University of Evansville and a Master of Science in Social Work from the University of Tennessee. He is a combat disabled Marine veteran of the U.S. war in Vietnam who lost both legs to a landmine. He also served as Secretary of the Veterans For Peace National Board. Currently, he serves as President of Veterans For Peace Chapter 104 in Evansville, IN. 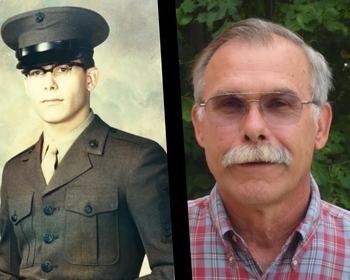 Mark enlisted in the Navy at 19, in Ames, Iowa, where he was raised.  He served as a US Navy Hospital Corpsman PO3 (Petty Officer, 3rd Class) and went to Viet Nam with the Marines, where he was severely wounded. Today he is on total disability from the Veterans’ Administration.

Mark earned a Bachelor of Fine Arts (Sculpture Major) in 1984 and a Masters in Art Education in 2000 from UW-Milwaukee. After earning his Bachelor’s he carved Stone for 10 years and then taught art for 20 years in Milwaukee Public Schools.

In 2005 he retired from teaching and founded the Milwaukee Homeless Veterans Initiative and is the national board of VFP.  Now 69 years old, Mark lives in Milwaukee, WI and has one son. 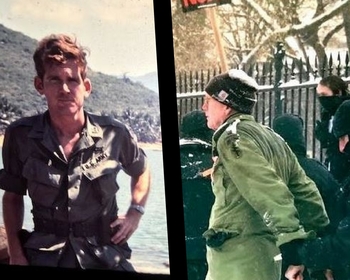 Paul enlisted in the Army in Iowa, to avoid the draft while in graduate school in 1968.

After basic training and Officer Candidate School, Paul was assigned to a Special Forces Division and sent to command a radio installation near Cam Ranh Bay, providing long range communication for the northern half of South Vietnam. Because North Vietnamese troops “could easily tap into one of the many land lines there was never a concern of being attacked at the site” but Paul spent about half his time away from the installation and saw combat as an Infantry Captain.

He says that exposure to massive radio waves at the site is responsible for his being sterile but that has also saved him from passing on damaged genes from his exposure to Agent Orange.

Paul is now 72 and still farms near Altona, Illinois. 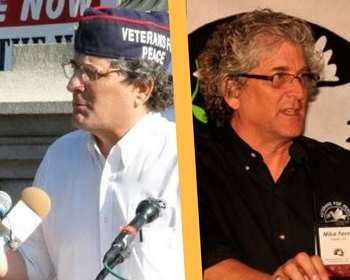 Mike served as a Navy corpsman from 1969-73, at the USN Hospital Great Lakes where he nursed many G.I.s returning from Vietnam, and aboard the carrier USS Hancock (CVA 19).  His experience led him to oppose war and he was discharged honorably as a conscientious objector.

He has worked as a bus driver, union organizer, communications director for national non-profits and was elected twice to Toledo City Council.  Mike traveled to Central America on a Veterans For Peace delegation in 1987, to Iraq just before and just after the U.S. invasion in 2003, to Afghanistan in 2010 and authored "Inside the Red Zone: A Veteran For Peace Reports from Iraq," (Praeger 2006).

Mike is a former national president of Veterans For Peace.  He has one daughter and now lives with his wife of 35 years in Toledo, Ohio, continuing his lifelong activism for peace and justice. 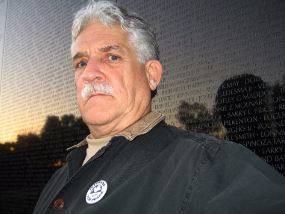 Mike joined the Navy in 1964, when he was 17 and was in Viet Nam 1966-67, where he served as an Engineman PO3 with the Mobile Riverine Force throughout the Mekong Delta and along the coast to the Demilitarized Zone.

After his military service, Mike moved to northern California, “to put the whole thing behind me and be left alone,” working as a logger. He later went back to school and got a degree in Fish Biology from Humboldt State University and worked for the National Oceanic and Atmospheric Administration (NOAA) for 25 years.

He is now retired, has a daughter and a grandson and lives on Cape Cod. 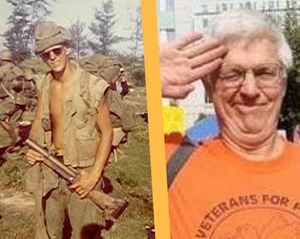 Paul Cox was in the Marines from 1968 to 1972, and spent 18 months as a grunt (infantryman) in the Vietnam War in 1969 and 1970.  He enlisted in the Marines with the desire to fight in Vietnam, but by the time he left the war he, like many veterans, was thoroughly disillusioned not just with the Vietnam War, but with war, the Marine Corps, our corrupt and opportunist leadership, and our nation’s attitude about The Other.   He has worked against war steadily since he left Vietnam, but has returned three times to study two of the worst legacies of that war—Agent Orange and un-exploded ordnance (UXOs).  Over the years he has spoken to hundreds of high school and college classes about his experiences in war and the history of the Vietnam War. 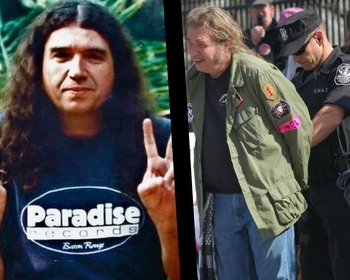 Ward was born in Chicago and in 1971 enlisted in the Army at New Orleans. He was a mortar gunner in a mechanized infantry unit in Germany.

Ward deserted his unit in Germany with three other soldiers in 1973.  They were captured after 45 days and court-martialed.  Ward was found guilty but the prison sentence was set aside.  He was awarded the "Top Mortar Gunner” award in 1973 and 1974 and was honorably discharged in 1974 after completing his 3 year enlistment.

He worked for the City of Baton Rouge from 1984 until he retired in 2000.  Since then he has been a full time activist and organizer.  He lives with his wife and two children in Baton Rouge. 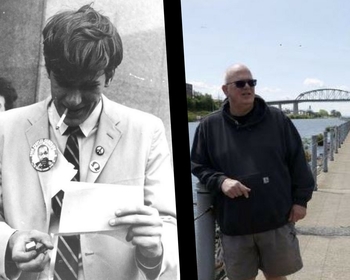 Bruce was born in Buffalo, NY.  He turned in draft card October 20, 1967 Washington, DC.  He publicly refused induction on three occasions over the course of two years 1967-1968.  In 1968 he was arrested in Buffalo, New York.  He then “jumped bail” in 1970.  He was granted the Humanitarian Asylum in Sweden in 1970.  He eventually immigrated to Canada in 1972.  While in Canada he continued his activism, working as a community organizer.  He returned to the US in in 1977, serving a short jail sentence.