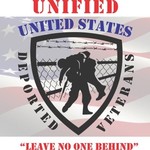 Thank you for your past support of deported veterans. Your assistance has been invaluable. You have helped us sustain and organize ourselves so that we can advocate to return home to the United States to be with our families and friends.

We are reaching out to you today because we plan to travel to the U.S. Mexico border at Nogales, Mexico adjacent to Nogales, AZ to join with the School of Americas Watch. SOA Watch is a nonviolent grassroots movement working to close the SOA / WHINSEC and similar centers and strives to expose, denounce, and end U.S. militarization, oppressive U.S. policies and other forms of state violence in the Americas.

At this critical time it is important for us to stand in solidarity with and share what our experiences serving in the United States military and as deported veterans have in common with the refugees and immigrants from Latin America who seek safety in the United States.

SOA, Encuentro 2018, gives Veterans For Peace deported veteran members the opportunity to unite with those feeling the injustices, of being considered as less than human beings, but also the opportunity to share ideas and strategies with those brothers and sisters that support and fight for the rights of those not able to fight for themselves, like those vulnerable to the hate and racism that is threatening the peace of our nations. We will uncover the connections between these struggles and the plight of deported U.S. veterans to countries around the world and the unfair punishment and political detention of immigrants who have served in the U.S. Armed Forces.

We plan to send 15 veterans to stand in solidarity with SOA and other members of Veterans For Peace. VFP members will march through Nogales, AZ and meet us on the Mexican side of the border. We will participate in workshops and planning to end the U.S. oppressive and militarized foreign policy in Latin America and act in solidarity with organizations and movements working for justice and peace throughout the Americas.

How can you help? We have a goal of raising $3,000 to cover the cost of our delegation. Could you help by contributing $25, $50 or $100 towards that goal? A donation of $200 will cover the travel and lodging of one veteran. We are so grateful for any amount of support you can offer. We know that we would be unable to do so much without supporters like you.

Thank you again for your support.