Every year, Veterans For Peace commemorates Memorial Day to remember the true costs of war. Our message for Memorial Day is to remember all who have died in war and to understand that no one wins. Vew our full 2021 Memorial Day statement on the right.

Below you will find reports, photos, videos, and more of VFP members and chapters taking action to remember ALL victims of war.

If you do not see your action/photo below, please send an email with the information to samantha@veteransforpeace.org.

This year, on Memorial Day, the Los Angeles Chapter of VFP partnered with Councilmember Monica Rodriguez to unveil a local Leave No One Behind Project mural. Through this public art, the Leave No One Behind Project urges the Biden-Harris administration and Congress to enact immigration policy to repatriate deported veterans, protect childhood arrivals, end family separation, and reunite families. 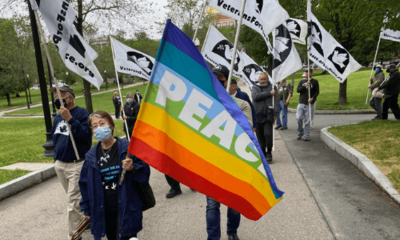 This year, the Smedley Butler chapter was able to resume their annual Remember the Fallen Memorial Day event. As in past years, attendees gathered at Park St. T Station and then paraded up to the Soldiers and Sailors Monument on the Boston Common, led by their bagpiper. Several Smedleys read Memorial Day readings and placed carnations on the monument in remembrance of ALL Victims of War. Attendees then realigned around the field of flags and rang the bell for departed Smedley Brothers.

Watch the videos of the event (Video Credit: Patrick Wilson) 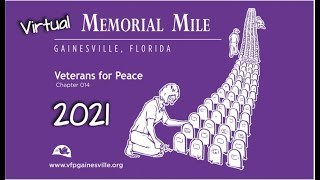 For the second year, VFP Chapter 14 in Gainesville, Florida hosted their virtual "Memorial Mile". This is the 14th year that Gainesville VFP has held a commemoration, and two years ago the city of Gainesville re-named the usual location of the memorial (8th Avenue Northwest) as "Memorial Mile," in honor of their work.

The virtual commemoration includes videos made over the years of the line of tombstones, including photos of those tombstones with written messages on them from loved ones who visited their friend or family members' tombstone. It also includes testimonials from VFP members and others impacted by Memorial Mile and its message of remembrance. Original music was provided by Bob McPeek.

Click the video above or watch the virtual Memorial Mile here.

From Chapter 23 President, Rev. Jim Swarts: Chapter 23 joined with Rochester Witness For Palestine in a Memorial Service for the Israeli and Gazan children killed in May 2021. The Memorial Day service was held on the grounds of the Irondequoit United Church of Christ and started with an ecumenical vigil and prayer service attended by Muslims, Jews, Christians, and non-believers.  Participants then read the names and ages of children killed in Israel and Gaza that were printed on white flags.  Following the reading of the names, everyone silently walked to a field of sorrow and placed the flags in neat rows, which will remain for several days. The theme of the memorial is to remind us that "Nobody is a number and everybody has a name." We must also remember that there are other casualties of war and conflict who need to be memorialized. 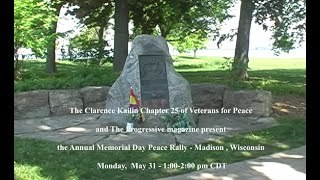 VFP Madison & Progressive Magazine livestreamed their Annual Memorial Day Peace Rally Online. Guest speakers included the Reverend David Couper and David Giffey, plus one of this year's high school essay awardees. The event featured live music by Old Cool and others, poetry- and more. The event concluded with the laying of carnations at the Spanish Civil War Veterans monument and bagpipes by Sean Michael Dargan.

Click the video above or watch the recording here. 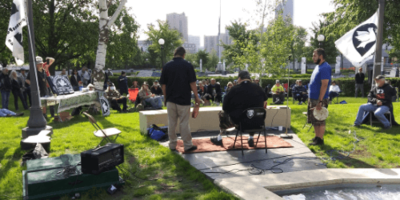 VFP Chapter 27 resumed their Memorial Day Service this year. Attendees gathered on the State Capitol grounds for a Native welcome, music, spoken word and time to remember “All" those have been lost to the scourge of “All" wars, veterans and non-veterans.

The New York City VFP Chapter held a virtual 2021 Memorial Day Commemoration asking the questions: What would Memorial Day look like if we commemorated all the victims of war, and not just the military fallen from our own country? What would it be like to honor all the dead and acknowledge all the destruction wrought around the world by U.S. military actions?

The online event explored this theme, pairing Americans, mostly military veterans, with speakers who have been on the receiving end of U.S. military aggression. 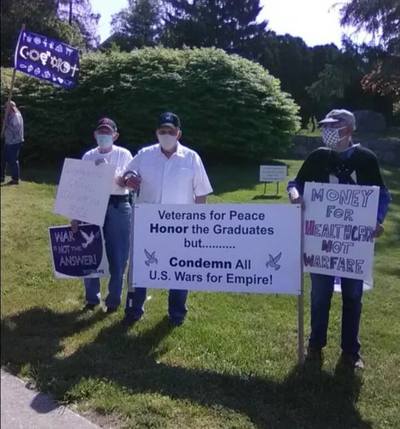 From Chapter 42 Member Jim Brasile: Both young and seasoned anti-war activists with an impressive number of supporters joined many young people in support of the Palestinian people who had recently suffered at the hands of US backed Israeli bombs. They all paid a visit to President Joe Biden who spoke at the US Coast Guard graduation just outside the grounds at New London's McKinley Park. Member Jim Pandaru was one of the leading organizers and was joined by other members from the chapter and members of The Peace and Solidarity Coalition. 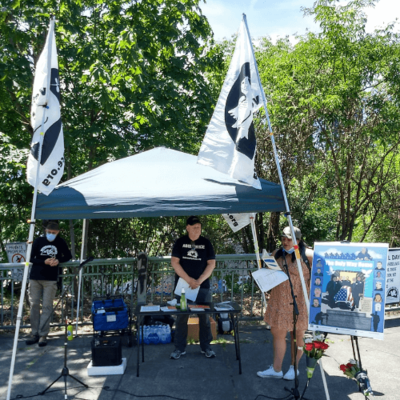 From Chapter 72 member Eileen Cowen: On May 31st, members of Veterans for Peace gathered in the Peace Memorial Park in Portland, OR for a demonstration and conversation about the true costs of war. The day was unseasonably warm, and it was our first in-person gathering since the pandemic began.

This year, we focused on veterans who had willfully served yet were deported after their term of service was up. In conjunction with the Leave No One Behind Mural Project, we are making progress to help raise visibility for these vets so they will be repatriated and honored for their service. We were honored to install a mural in Portland on this important day. 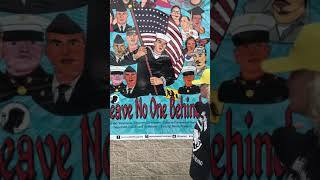 Veterans For Peace Chapters 74 and 93 once again joined forces to set up the Veterans For Peace Arlington Michigan display (one grave marker for every Michigan soldier killed in the Afghan and Iraq wars – 230 total) in downtown Detroit on Memorial Day.

The purpose of the display is to honor those who have fallen, to provide a place to grieve, and to educate the public about the costs of war, as well as the needs of those returning from conflicts.

This year, as part of Arlington Michigan, Veterans for Peace Chapters 93 and 74 installed Detroit’s first Leave No One Behind mural at Central United Methodist Church with the support of Central’s Swords into Plowshares Peace Center and Gallery.
Watch the video above or click here watch the installation. 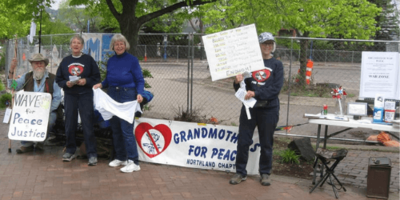 In Duluth, VFP Chapter 80 and Grandmothers for Peace gathered for their "Costs of War Walk” to draw attention to both the human and financial costs of war. They set up signs citing numbers from a Brown University study called “The Costs of War Project” that analyzed how many people have been affected by conflicts and how much money was spent on the military and defense budget since 9/11. This year's theme was the Remembrance of all sacrifices made and all victims of war.

Members of VFP Chapter 97 were invited by PeaceWorks-KC this year to cosponsor their Memorial Day observance and share reflections. Two representatives of Veterans For Peace spoke at the rally.

Each year, as an alternative to the usual glamorization and glorification of war that accompanies Memorial Day, the Orange County Peace Coalition invites the greater Triangle community to its Commemoration for Victims of War -- war casualties, military families, civilian casualties, and the social structure deprived of resources due to the many costs of war. They honor those in the military who have died, living veterans, and those who resisted, while bringing attention to the causes of conflict, the harm it does to society, and the many ways it intersects with other social ills.

This year, the online event featured the keynote address, “Everyday Resistance: The Art of Living with Endless War,” by Dr. Joseph W. Groves, retired professor of Peace and Conflict Studies and project director of Palestine/Israel: The Economics of Inequality, Nonviolence International. The program also featured songs of peace by Mary Johnson Rockers and the Raging Grannies, selected poetry and other readings, an annual message from Veterans For Peace, and Memorial Day proclamations from the mayors of Chapel Hill and Carrboro. The program concluded with the playing of “Taps” by Christopher Meglan.

Letters to the Editor, OpEds, Etc. 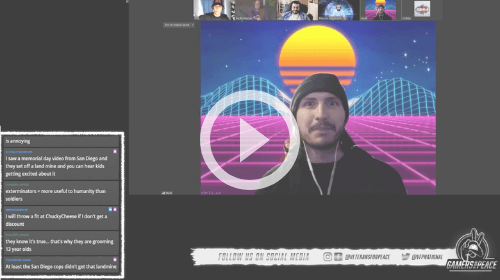 On Memorial Day, community members of the VFP Gamers For Peace initiative came together to discuss the origins of Memorial Day, the shift in its meaning and celebration, and how to highlight the consequence of the unchecked destruction that war causes. VFP chapter memorial day actions were highlighted and celebrated by the crew, before a conversation with Conscientious Objector (CO) "PoissonMushroom" aka Justin, about his journey as a CO in the Army. The show wrapped with the sharing of anti-war poetry offered by panel members and a  viewing of "Body of War", a documentary witnessing the life and efforts of Tomas Young.

Click the image above or watch the recording here.

The Golden Rule and her intrepid crew of two women and two men has landed safely in Sausalito, San Francisco Bay, after a month-long ocean passage from Hawaii. This required great courage, skill and determination, just what it will take to abolish nuclear weapons and war! Check out the photos below! 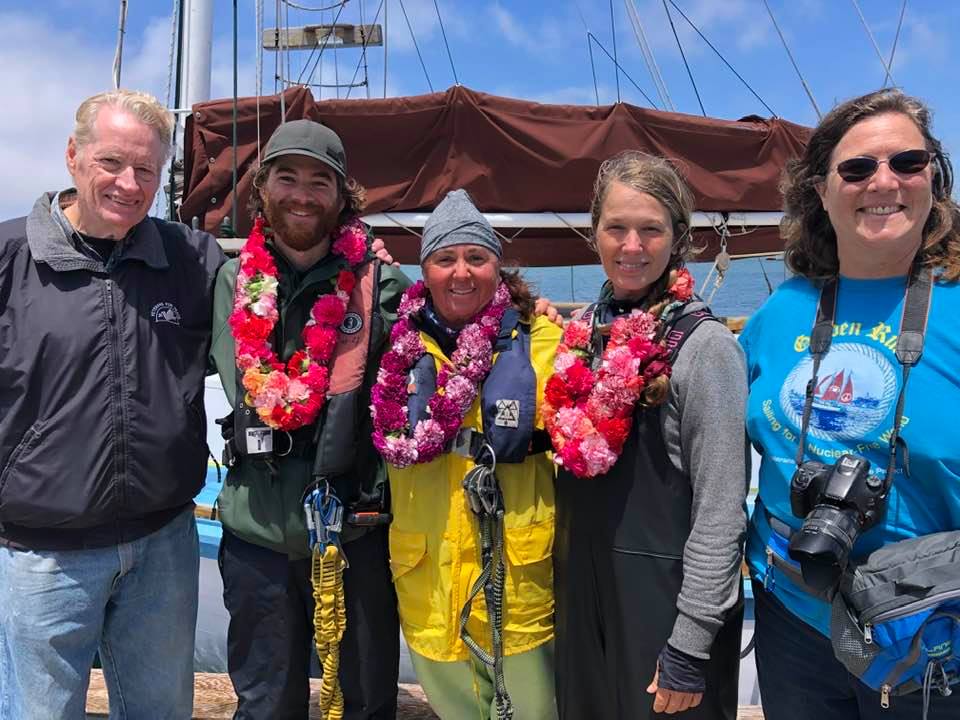 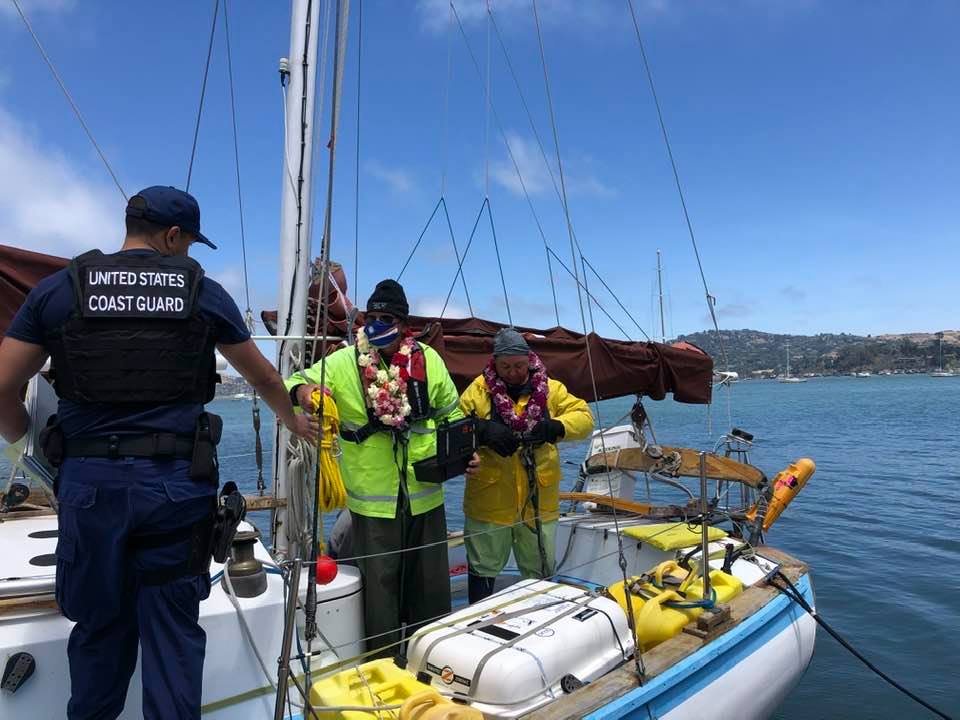