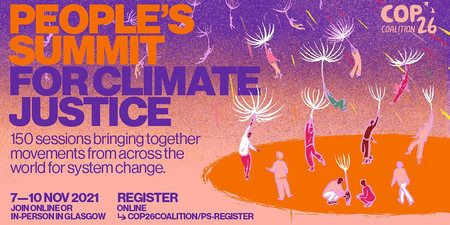 Check out COP26.tv, a daily livestreamed news and information channel from Glasgow, Scotland, reporting from both inside and outside COP26.

David Collins is reporting daily to us from COP26 in Glasgow, Scotland. Click here to read.

Climate Envoy John Kerry is leading the U.S. delegation, including 13 cabinet members and senior administration officials, to the UN-led climate talks, as he did in 2015 when the Paris Climate Accord was signed. Six years after the Paris COP, the climate and ecological crises have worsened, in no small part because of U.S. militarism and wars. We demand that Kerry call for the reporting and reduction of military-caused GHG emissions. See the 6 demands which VFP members presented to Kerry’s senior staffers at a meeting last April: 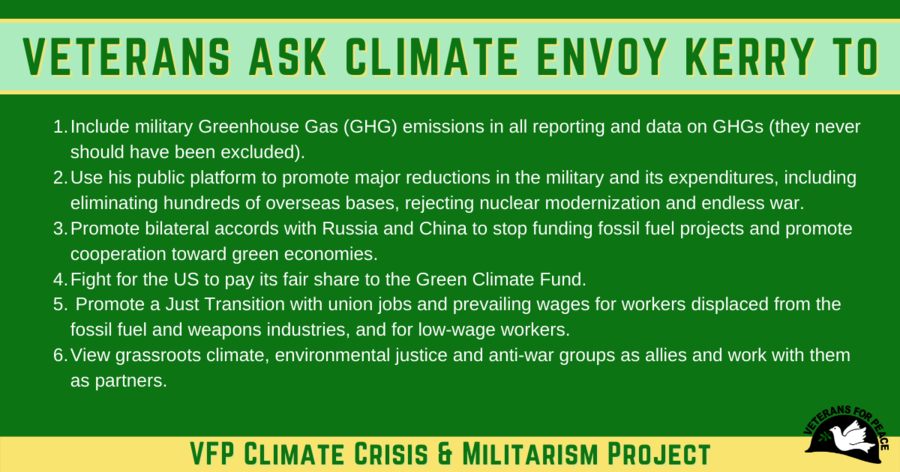 National leaders from around the world will announce their Nationally Determined Contributions (NDCs) to keeping global temperature rise to 1.5 degrees C. Thousands of climate justice activists are expected to show up outside the conference walls, including Greta Thunberg.

Many corporations as well as governments will release their latest climate plans. Will these corporations include the Big Five of the U.S. Military-Industrial Complex: Boeing, General Dynamics, Lockheed Martin, Northrup Grumman, Raytheon? We’ll be watching. 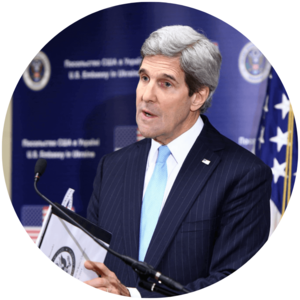 Statement: Veterans For Peace Objects to Militarism in “Eagle Act” and “U.S. Innovation and Competition Act of 2021”

As members of Veterans For Peace, we appreciate the work of Climate Envoy John Kerry in negotiating the U.S.-China Joint Statement Addressing the Climate Crisis (April 17, 2021).

To our disappointment, the Senate recently undermined Kerry’s efforts when it passed the “U.S.Innovation and Competition Act” to tether governmental investment in technology to militarized rivalry with China. Similarly, the Eagle Act, legislation proposed by Rep. Meeks, must be amended to remove the call for increased militarism in the Asia Pacific.

Leaders Climate Summit
On April 22-23, President Biden convened an online meeting of heads of state, cabinet ministers and experts from 40 countries to discuss responses to the global climate crisis. Climate Envoy John Kerry, along with other members of the administration, played a major role in this international gathering. Read the Statement on Leaders Climate Summit.

Because there was a huge anti-war veterans’ movement 50 years ago (including some current VFP members), Kerry spoke for that movement to Congress with a devastating critique of the Viet Nam War. Yet Kerry has not addressed militarism’s role in exacerbating the climate crisis; nor have we heard back from Kerry’s office since our April 14th meeting despite repeated inquiries. We plan to track Kerry’s pronouncements and actions (or lack of them) on the climate crisis at least through the COP26 https://ukcop26.org/ in November.

More information and ways to take action below!