With the combined passage of the Inflation Reduction Act of 2022 (IRA; H.R. 5376) and the Infrastructure Investment and Jobs Act (H.R. 3684) President Biden and Democratic members of Congress have finally passed major legislation that addresses the climate. Unfortunately, the combined bills do not completely fulfill Biden’s promise of reducing U.S. emissions 50% by 2030. An analysis by the Rhodium Group found “…the package as a whole drives US net GHG emissions down to 32-42% below 2005 levels in 2030, compared to 24-35% without it”. In addition, these bills do not address military emissions.

The Biden Administration's most significant acts impacting DoD's current efforts to mitigate and to adapt to climate change are Executive Orders (EO) issued in the administration's first year. Biden's EO 14008, which was issued February 1, 2021, details Federal plans for tackling climate change. EO 14057, which was issued December 8, 2021, promotes decarbonizing the supply chain. How these EOs impact DoD's climate plans are described in the section on DoD.

Since EO's can be quickly changed by the next Executive, future progress on reducing military emissions may depend largely on which political party controls the government, especially the White House.

The IRA resulted largely from efforts in the Democratic caucus in the 117th Congress with no support from Republicans. There was strong bipartisan support, however, for the massive military spending bills or National Defense Authorization Acts (NDAAs) for FY2023, FY2022 and FY2021. In the FY2021 NDAA, DoD is instructed to "...report on the total level of greenhouse gas emissions for each of the last 10 fiscal years" (Public Law 116-238, Section 328). This report, which was submitted by the Secretary of Defense but not publicly released, is described in the following section.

In the FY2022 NDAA, DoD is mandated to "... submit to Congress a plan to reduce the greenhouse gas emissions" and to provide to Congress "... annual briefings on the progress of the Department of Defense toward meeting science-based emissions targets...." (Senate Bill S. 1605, Section 323). This reduction plan mandates (in Section 873) that DoD establish an independent study "not later than March 30, 2022" with a "federally funded research and development center" to examine its supply chain and to consider "... resilience, low-carbon, or low-toxicity criteria as competition factors...." This is important because, as Dr. Neta Crawford, Professor of Political Science at Boston University and co-director of the Cost of War Project, points out, total emissions from the U.S. war industries are at a minimum double the emission levels of the military they support.

Preliminary analysis of the FY2023 NDAA reveals a lack of measures supporting The emission reduction plans for the U.S. Army, Navy, and Air Force, which are addressed in the following section. For example, only pilot programs for sustainable aviation fuel and vehicle charging stations are included along with a 2-year study of Federal fleet vehicles. In addition, limitations are placed DoD procurement and replacement of “… existing non-tactical vehicle fleet of the Department of Defense with electric vehicles, advanced-biofuel-powered vehicles, or hydrogen-powered vehicles” (Sec. 328). On the plus side, annual environmental and energy reports by DoD are renewed.

The House Select Committee on the Climate Crisis was terminated with Republican control of the House of Representatives. 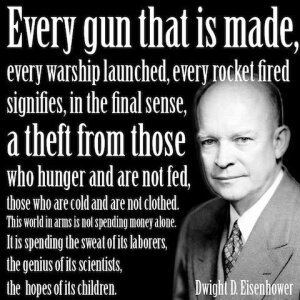 In response to the mandates in the FY2021 NDAA, the Secretary of Defense submitted an emissions report to the Committees on Armed Services of the Senate and House of Representatives and to the Comptroller General on August 30, 2021. Revealed in a Congressionally-mandated report, DoD emissions reduced by 29.1% from 2008 to 2019, which tracks with emissions levels estimated by Dr. Neta Crawford in a Cost of War Project 2019 study The military GHG emission decrease appears significant but this number does not include emissions by private contracted services, which make up 24% of DoD’s average budget (The Growth of the "Camo Economy" and the Commercialization of the Post-9/11 Wars).  In addition, if the same rate of decrease continues through to 2050, DoD will still be emitting approximately 24MMT of GHG or nearly half of its present-day level.

The U.S. Army released their emission reduction plan or Army Climate Strategy (ACS) on February 8, 2022 Citing President Biden’s Executive Orders (EO) 14008 and 14057, the ACS states the Army will achieve 50% reduction in GHG emission by 2030 and be net zero by 2050, including “all Army procurements.” Referring to the ACS, the Washington Post pointed out “The strategy still needs to be backed by an actual budget”. For an analysis of the ACS by Dr. Neta Crawford see "US Army plan to combat climate change lacks the fighting spirit".

The U.S. Navy released their Department of Navy Climate Action Plan 2030 (NCAP; Department of the Navy Climate Action 2030.pdf) in May 2022. The NCAP is specific in its 2030 targets, such as, ”…a 65 percent reduction in scope 1 and 2 greenhouse gas emissions department-wide by 2030 (measured from a 2008 baseline) that do not pertain to operational emissions.” NCAP does state, however, the Department of Navy “…will address its operational emissions, supporting a Department-wide pathway to net-zero by 2050, focusing on initiatives that both increase capability and decrease emissions.” How these climate goals square with the NCAP closing declaration that the U.S. Navy will “…remain the world’s dominant maritime force,” is not enumerated.

In October 2022, the Department of the Air Force (DAF) released a climate action plan that includes the Space Force. The plans stressed three priorities:

Unlike the Army and Navy plans, the DAF plan does not propose attaining net zero carbon emissions by 2050.

When evaluating DoD’s plans for reducing its GHG emissions, one must be on the lookout for “greenwashing,” which are deceitful practices designed to appear environmentally friendly. One example is the use of “net zero,” which is a policy where GHG going into the atmosphere are balanced by removal out of the atmosphere. Dr. Kevin Anderson, Professor of Energy and Climate Change at the University of Manchester, points out some of the pitfalls of the policy. Essentially, to support any realistic “net zero” pronouncement the removal processes and GHG removal amounts must be accounted for separately from emissions. For example, when the NCAP and ACS and declare they will be net zero by 2050, they need to produce a plan to back that up. This is a formidable task if the present force structure is maintained. To illustrate this, if DoD were to count on the planting of trees to offset their emissions, the maximum planting of new trees GLOBALLY would sequester less than 50% of current US military emissions (see Table 2).

As pointed out in the February 28/March 7, 2022 Time Magazine article, “To Take Climate Change Seriously, the U.S. Military Needs to Shrink", to significantly shrink its emissions, the US military must shrink. Plus, with an already bloated military budget, the US cannot afford a same sized “green” force structure. 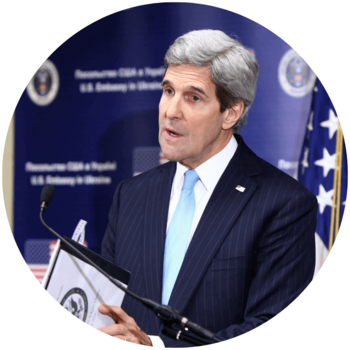 The closest the State Department and Presidential Climate Envoy John Kerry have come to addressing the connections between climate and the military are Kerry’s statements pertaining to the Ukraine conflict “… in terms of the climate efforts that a war is the last thing you need with respect to a united effort to try to deal with the climate challenge". As of November 2022, Kerry has not addressed the incompatibility of an arms race with global efforts to mitigate a worsening climate crisis. (For the CCMP view on what needs to be done on Ukraine see  The Ukraine Crisis and the Recent IPCC Report).

John Kerry’s and Biden’s State Department’s lackluster progress negotiating meaningful global action to mitigate the climate crisis is reflected in the mostly poor results of COP26 and COP 27. Regarding the intersection of climate change and militarism, it was only addressed at COP 26 outside of the formal meetings during demonstrations and in panel discussions at the COP26 Coalition, People's Summit for Climate Justice. At COP 27, military emissions were finally included as a topic in a formal side event. But again, official US State Department representation was absent. Aside from an unfunded promise to establish a “loss and damage” program, COP 27 was a failure. Prospects for COP 28 in the UAE are not brighter with the naming of the CEO of the Abu Dhabi national oil company as conference chair, with Kerry’s endorsement.

For our view of USA’s culpability in the COP failures, see the VFP|CCMP stated reason is USA’s poor “example.” After all, why should other nations, both USA’s friends and foes, prioritize action on climate when the USA spends twice more in one year on so-called “defense” than the total 10-year funding for climate action in the IRA?