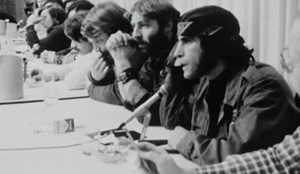 Like this year, February 1st, 1971 was a Monday, but unlike this year it was the 2nd of 3 days of the Winter Soldier Investigation (WSI) in Detroit, organized by Vietnam Veterans Against the War.   Over 100 veterans testified.   The panelists spoke of atrocities they had seen or carried out.   WSI got very little press at the time, but it did get some attention from anti-war members of Congress.

The My Lai massacre had occurred in March 1968, and became public knowledge in November, 1969.   Supporters of the war were claiming that My Lai was an isolated incident, but WSI put the lie to that.   The testimony was both a revelation of damning information about a brutal war, and an important expression of the anti-war veterans’ movement.  Both the information and the movement played important roles in getting the US out of Viet Nam.

WSI was unprecedented in two ways: 1) the participants in war crimes were among those exposing them – for the purpose of stopping such crimes; and 2) the panel members were not generals, politicians, bureaucrats or academics, but rather rank and file soldiers.

Fifty years later, we are reeling from the violent insurrection at the Capitol and the fallout from an attempted racist coup carried out by adherents of the Confederacy and Nazism, an attack that included some veterans.  It was funded by wealthy interests, and led and abetted by Trump and major forces within the Republican Party.  There are threats right now, implicit and otherwise, to Democratic members of Congress from certain of their Republican colleagues.

We don’t yet know how the impeachment trial starting February 8th will play out – how much it will expose and put on trial the criminal and treasonous actions and networks behind the events of January 6th.  But we must work for accountability here and now.

A dozen years ago, President Obama said we must look forward, not backward; this meant there would be no official public exposure and accountability for crimes like torture under the Bush-Cheney regime.  The Nuremburg Trials say otherwise.   The Truth and Reconciliation Commission in South Africa say otherwise.   The Winter Soldier Investigation says otherwise.

Article by Steve Morse and edited by Bill Ehrhart