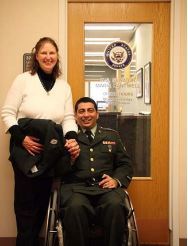 The persecution of Muhammad Zahid Chaudhry (“Zahid”) began 18 years ago, after 9-11, when he was designated as NS (National Security [threat]) by the U.S. government. The rest is history.

Zahid has a naturalization interview with US Citizenship and Immigration Services (USCIS) based on his Earned and Qualified Military Service in the U.S. Army. Citizenship based on military service has always been expedited. It can be granted right after graduation from Basic Training. But in Zahid’s case, he has had several citizenship interviews since 2002 which instead turned into lengthy interrogations.

Could this interview be the affirmative outcome he’s been hoping for after 18 years of having been traumatized by threats of deportation? Or is it yet another diversion intended to distract him from ongoing government attempts to deport him?

Zahid has earned and qualified by law for citizenship in multiple ways, not the least of which are his Qualified Military Service; his marriage of nearly 20 years to a U.S. citizen; and U.S. family ties on his father’s side for forty years -- since the 1980s. But, under a national security program known as the “Controlled Application Review and Resolution Program” (CARRP), the government excludes many applicants from Arab, Middle Eastern, Muslim and South Asian communities by delaying and denying their applications without legal authority. Learn more: https://www.aclusocal.org/carrp

After 9-11-2001, the US government began to engage in constant harassment of Zahid, who at the time was -- and still is -- a legal US resident, and his wife Ann. At that time, they were living in the conservative stronghold of Yakima, WA, and must have seemed an odd couple: a man born in Pakistan and his American wife, who had been a widow raising two children by herself for nearly 13 years. A Yakima police lieutenant targeted Zahid, seizing the opportunity to boost his career in the increasingly Islamophobic environment after 9-11.

Zahid comes from a long family tradition of community service and was already volunteering with the Yakima Fire Department, Red Cross, etc. It was in this spirit that he applied to be a volunteer with the Yakima Police Department. Police lieutenant Gary Belles became suspicious of his motivation and accused him of having lied on the application. Years later, expert forensic evidence would indicate that the application may have been tampered with while in the custody of Gary Belles.

What followed are dozens of mandated appearances and numerous repeat applications for naturalization, some of which mysteriously got lost--although the checks that accompanied them were cashed. At his last immigration hearing in March 2018, it was affirmed once again that Zahid was and has been a U.S. Legal Permanent Resident. True to form, ICE is appealing the immigration judge’s decision – going against USCIS’ intent to resolve and finish processing naturalization for Zahid. Innocent lives are collateral damage in these turf wars.

Gary Belles was instrumental in adding Zahid’s name to the secret Terrorist Watchlist, from which there is no meaningful way to get removed. Research by The Intercept  “revealed a staggeringly due-process-free system in which the government was routinely affixing the word ‘terrorist’ to an individual’s name and disseminating that information to a sprawling network of foreign and private partners, with virtually no evidence required to support the claim. A federal judge has recently ruled this practice unconstitutional.

Prior to 9-11, out of a desire to contribute by helping communities with disaster relief and recovery, Zahid joined the Washington Army National Guard. After 9-11, though, his unit was activated for Operation Iraqi Freedom and he served in the U.S. Army for four years. His life was forever changed by his serious injuries while serving in the Army. He has been in a wheelchair ever since and suffers from prostrating and debilitating migraines, blurred vision, and intolerable physical pain. For a detailed account of this situation, visit keepzahidhome.org