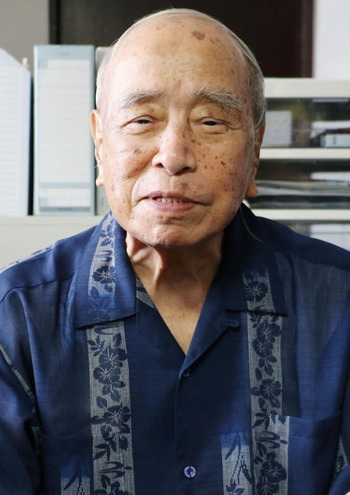 "Former Okinawa Gov. Masahide Ota, a noted historian and survivor of the Battle of Okinawa, died Monday of pneumonia and respiratory failure at a hospital in Naha, his office said. He had turned 92 the same day.

Ota, head of the Okinawa International Peace Research Institute, served as governor from 1990 to 1998. He was governor when U.S. Ambassador Walter Mondale agreed with Prime Minister Ryutaro Hashimoto in April 1996 to return the land used by the Futenma air base in Ginowan, central Okinawa.

The accord was aimed at reducing the U.S. military’s footprint in Okinawa, which hosts the bulk of its military facilities in Japan."

Read the rest of the piece in The Japan Times

Members of recent delegations to Okinawa also wrote the below letter:

To the People of Okinawa,

We've lost a true friend in peace, a gracious and humble leader much respected by the people of Okinawa, ​an inspiration to all of us who aspire to a world without war, without wasteful and destructive weapons of war.

Gov. Ota will be remembered with much admiration.  He will long inspire our efforts as members of Veterans For Peace in cooperation with the people of Okinawa as we pursue our shared commitment to return the island of Okinawa to a place of peace, freedom, justice, and sustained life and vitality undamaged and unimpeded by unwanted military bases.

We feel honored to have known Gov. Ota for a brief time in his lifetime of distinguished service to the people of Okinawa, and people around the world.

With love and solidarity,

The Veterans For Peace Delegation to Okinawa