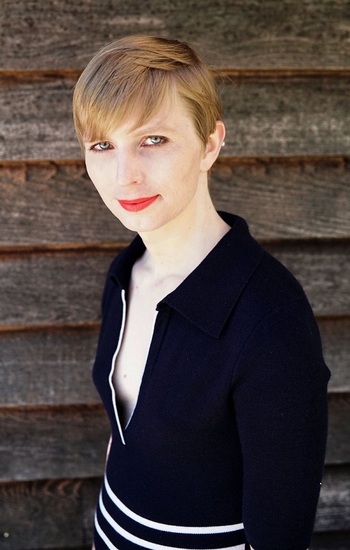 Chelsea Manning will be released from prison this coming Wednesday, May 17.  Veterans For Peace is celebrating her freedom.  We are so grateful to Chelsea for her courage in releasing U.S. Army documents that allowed the public to know the truth about the U.S. wars and occupations of Afghanistan and Iraq.  She did not deserve the torture, solitary confinement, abuse and imprisonment these last 7 years, which was a longer sentence than any U.S. whistleblower has had to endure.  The 35-year prison sentence given to Chelsea by a politically motivated Army court martial was an obscenity.  Fortunately, a broad-based support movement of peace, civil liberties and LGBT rights groups was able to convince President Obama to commute her sentence.

Veterans For Peace applauds Chelsea Manning for her courage in publicly embracing her identity as a woman, even in the midst of being persecuted by the U.S. government.  Chelsea has become a role model and a cause celebre in the movement for transgender rights.  She has also become a popular author, regularly writing in the Guardian on issues of transparency and whistleblower protection.

Chelsea is thanking her supporters.  Here is a statement she has issued before her release:

“For the first time, I can see a future for myself as Chelsea.I can imagine surviving and living as the person who I am and can finally be in the outside world. Freedom used to be something that I dreamed of but never allowed myself to fully imagine. Now, freedom is something that I will again experience with friends and loved ones after nearly seven years of bars and cement, of periods of solitary confinement, and of my health care and autonomy restricted, including through routinely forced haircuts. I am forever grateful to the people who kept me alive, President Obama, my legal team and countless supporters.

“I watched the world change from inside prison walls and through the letters that I have received from veterans, trans young people, parents, politicians and artists.My spirits were lifted in dark times, reading of their support, sharing in their triumphs, and helping them through challenges of their own. I hope to take the lessons that I have learned, the love that I have been given, and the hope that I have to work toward making life better for others.”

Kudos also go to the many VFP members who supported Chelsea Manning,in protest actions at Marine Brig in Quantico, Virginia, outside Fort Meade, Maryland, where many of us attended Chelsea’s court martial, and outside the military prison at Fort Leavenworth, Kansas.  Some of you were arrested for Chelsea. Many of you donated substantially to her defense fund. If anything, your support even increased after Bradley became Chelsea.  Bravo!  And how great to have some good news to celebrate!

Take a moment on Wednesday – maybe get together with a few friends –  to think about Chelsea Manning as she walks out the gates of Leavenworth, a free woman.  This is a victory for all.

Read Chelsea's Statement and Update from her Legal Team