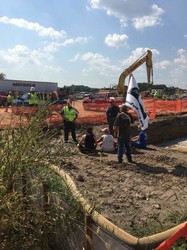 In addition to the egregious violations happening on native land in North Dakota, the same pipeline is being drilled under the Mississippi River, a source of water of millions of citizens, between Iowa and Illinois. Serious environmental damage has already been done. The ecological and economic impact of a leak would be staggering. Currently, protests are happening daily at this site and Veterans For Peace has been participating!

A 24-hour encampment has been growing near the drill site, and there's plenty of room for those with the ability and willingness to make a stand. Whether you are able to come for a few hours, a day, or longer, you are a most valuable asset. Veterans For Peace members are present at camp, and are involved with the organization of the encampment as well as the protests themselves. We invite you to join us and help build the pipeline resistance at 3333 County Road X28 Keokuk, IA.

There have been thousand of oil spills over the last six years alone; it is not a matter of IF, but a matter of WHEN. We need to shut it down- and we need your help to do it. As veterans, we see the connections between greed, racism, violence and environmental destruction in our own communities, and war and militarism abroad. We strive to achieve "Peace at Home and Peace Abroad.”