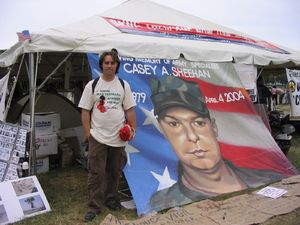 Veterans For Peace is saddened to learn that former staff member and veteran, Chris Snively has passed away.  He worked for the National office from 2001-2003.

Read the touching tribute from his family.

Chris Snively came to the VFP office very soon after it had moved to St. Louis from Washington, D.C. He brought to the task of office manager an easy-going, amiable yet very efficient presence that quickly earned the respect and good will of our somewhat polyglot and sometimes fractious membership. I never heard him hang up a phone angry or saw him scowl and mutter the way I would. 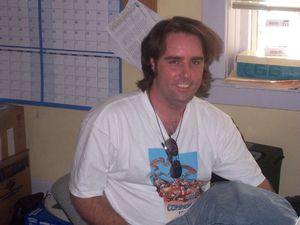 My wife, Joan, who lead a team of volunteers, remembers Chris with great affection. &quot; Chris always greeted us with a cheerful smile when we came into the room.&quot; She could see and appreciate what a valuable asset he so quickly became.

He was an avid student of the realities of war, having had his own exposure in Bosnia to political manipulation and human misery. Early on, Charlie Atkins, Korea vet and then VFP treasurer, and I took him along with us on the annual pilgrimage to the School of the Americas at Fort Benning, Georgia. He asked us all sorts of questions about our conflicts and others we knew a little about. And, of course, the SOA was an eye-opener to this budding activist.

While he was ably running our offices, he was also attending school at the University of Missouri at St. Louis. It was when he obtained his undergraduate degree and was ready to go on to graduate work that we lost him to the university in Indiana.

Throughout his final illness he was always his cheerful, positive self, showing much greater regard for the feelings of others around him than concern for himself. Through his frequent postings on Face book, we learned to know his wife and children and his many friends. His was a generous sharing, motivated by love rather than vanity. This young man exemplified love of the highest order. I missed him when left St. Louis and I miss him even more now.