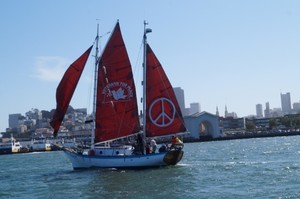 The historic sailing vessel Golden Rule has arrived in San Francisco just in time for a peaceful encounter with Fleet Week warships, during the Parade of Ships, Friday 11:am to 12:30 pm.  She will be joined by at least one other sailboat from the Bay Area’s famed Peace Navy.  With her red sails emblazoned with the peace symbol and the Veterans For Peace logo, the Golden Rule will be hard to miss, as she sails peacefully against an array of huge naval ships.

The media is invited to sail on the Golden Rule beginning at 10:30 am on Friday and 1 pm on Saturday. The Golden Rule can take six passengers at a time.  To reserve your place, please call 206-499-1220.

The Golden Rule and her crew intend to sail peacefully on the San Francisco waterfront throughout Fleet Week activities on Friday and Saturday. The public is invited to meet the crew and to tour the boat.

In 1958, the Golden Rule and her crew of Quaker peace activists ignited an international movement to stop atmospheric testing of nuclear weapons, when they attempted to sail into a nuclear bomb test zone in the Marshall Islands.  Five years ago, after the historic sailboat was discovered at the bottom of Humboldt Bay on the north coast of California, local members of Veterans For Peace launched a national campaign to restore the Golden Rule and her mission to sail for a nuclear free world.

“Nuclear weapons are still with us and the threat of nuclear war is very real,”said the Golden Rule’s crew member Helen Jaccard. “We are dismayed that the U.S. government plans to invest One Trillion Dollars into upgrading its nuclear arsenal, instead of reducing and eliminating nuclear weapons, as called for in the Nuclear Nonproliferation Treaty.”

“While we welcome the historic international agreement with Iran which limits its nuclear program, by far the greatest nuclear dangers are from existing nuclear weapons and the countries which possess them,” said Jackie Cabasso of the Western States Legal Foundation. “Some 15,700 nuclear weapons, orders of magnitude more powerful than the bombs that destroyed Hiroshima and Nagasaki, 94% held by the US and Russia, continue to pose an intolerable threat, and no disarmament negotiations are underway or planned. Instead, the US is modernizing all three of its nuclear weapons delivery systems - submarines, intercontinental ballistic missiles and bombers -- along with every warhead type in its arsenal. Today we call on the US government to initiate a process, with a timetable, to achieve the universal elimination of nuclear weapons.”

In 2010 the Golden Rule was found on the bottom of Humboldt Bay on the northern California coast, with a huge hole in her side.  When members of Veterans For Peace learned about her history, they launched a campaign to give her a new life.  Five years and thousands of volunteer labor hours later, the Golden Rule is once again sailing for a nuclear free world.

The Golden Rule is a national project of Veterans For Peace.  “Over the next ten years, the Golden Rule will carry her message of peace all over the world,” said Gerry Condon, the organization’s vice president.

For more information about the Golden Rule, go to www.vfpgoldenruleproject.org