ACLU lawsuit on behalf of VFP will continue to challenge City's 11-month delay in acting on permit application, and favoritism for South Boston Allied War Veterans parade, which excludes most LGBT and veterans' peace groups. 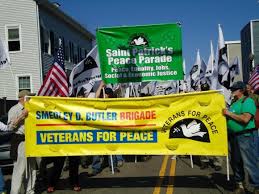 FOR IMMEDIATE RELEASE Monday, March 9, 2015
CONTACT: Christopher Ott, communications director, 617-482-3170 x322, cott@aclum.org Patrick Scanlon, Veterans for Peace, 978-590-4248, Vets4PeaceChapter9@gmail.com
BOSTON -- The Massachusetts chapter of Veterans for Peace (VFP) today announced the cancellation this year of its annual St. Patrick's Day Peace Parade, which had been scheduled for noon on March 15. The cancellation follows a lengthy delay by the City of Boston—which for nearly a year refused to respond to VFP's permit application. It also follows a federal court ruling in VFP's lawsuit brought by the American Civil Liberties Union of Massachusetts against the City, issued on the evening of Friday, March 6, which declined to order the City to issue VFP a permit for noon. The ruling leaves in place the City's decision to favor the parade run by the South Boston Allied War Veterans Council, which traditionally begins at 1pm and has excluded gay organizations, Veterans for Peace, and other peace organizations.

The ruling also allows the City to continue its past practice of relegating the Veterans for Peace Chapter 9, Smedley D. Butler Brigade parade to a late start on a winter afternoon. In reaching that decision, Judge Leo Sorokin concluded that, at this stage of the litigation, VFP could not show a First Amendment violation "at this time." But Judge Sorokin recognized that between March 2014, when VFP filed its permit application, and February 2015, when VFP filed suit, City officials did not "respond to the VFP regarding its permit application" and did not "respond in any way to the various inquiries made by [VFP's] counsel regarding the permit."

Patrick Scanlon, the coordinator of the Smedley D. Butler Brigade of VFP, issued this statement:
"Veterans For Peace sadly and reluctantly has concluded that it will be necessary to cancel this year's Saint Patrick's Peace Parade. Having sought a permit for a noon start time and asked other participants to join us then, we were faced with the daunting task of rescheduling and re-organizing at the last minute when the City notified us we would again have to start in the late afternoon. Even after the federal court refused to overturn the City's decision, we had hoped we would be able to go forward, but too many of those who had expected to march in the Peace Parade could not join us later in the day, making it impossible to bring together a strong and effective counter-statement to the parade organized by the South Boston Allied War Veterans Council (AWVC).
"As veterans of the U.S. Military, many decorated in war, we are very disappointed and appalled by the treatment we have received this year by the City of Boston. We have a simple message of peace, equality and social justice, in contrast to the other parade that has a militaristic and exclusionary message. Yet our message is once again prohibited on the streets of South Boston during the Saint Patrick's Day celebrations. Putting us one mile behind the other parade again would have resulted in our military veterans walking in the late afternoon when most spectators have left the area.
"We as veterans are tired of the deplorable treatment we have experienced over the past five years. We are proud soldiers, sailors and airmen and we will not be denigrated, marginalized and treated with total disrespect. We, who have served this country, have seen first-hand the horrors of war and now work for peace and the peaceful resolution of conflict, are ostracized by the City of Boston and the AWVC excluding these messages on the streets of Boston. The City of Boston and the AWVC should be ashamed of themselves. We are not going away. To paraphrase General Douglas McArthur's pronouncement in 1941, 'Keep the flag flying, we will be back.'"
Sarah Wunsch, deputy legal director for the ACLU of Massachusetts, expressed disappointment with the City's treatment of the St. Patrick's Peace Parade and noted that the lawsuit against the City will continue. "The Veterans for Peace organization has First Amendment rights to be heard and seen by those who gather in South Boston to celebrate St. Patrick's Day, and we hope those rights will be vindicated as the case goes forward."
VFP Smedley D. Butler Brigade is a chapter of the national VFP. Founded in 1985, Veterans for Peace is a national organization of men and women of all eras and duty stations, including from World War II, the Korean, Vietnam, Gulf, Iraq, and Afghanistan wars, as well as other conflicts. Veterans for Peace works to expose the true costs of war and to support veterans and civilian victims. For more information, go to www.smedleyvfp.org
For more information about the lawsuit, go to:
https://www.aclum.org/news_2.12.15
For more information about the ACLU of Massachusetts, go to:
https://aclum.org
Category: Actions
Tags: Veterans For Peace, St Patricks Peace Parade, Pat Scanlon, South Boston
secret