An Open Letter to Our Federal Elected Officials

CONSTRUCTIVE ALTERNATIVES
TO ADDRESSING CRISES IN THE MIDDLE EAST 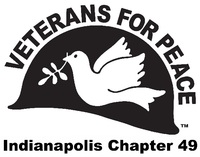 Veterans For Peace Chapter 49 in Indianapolis represents military veterans and families who seek constructive long-term alternatives to resolve conflicts. As veterans who have sworn to uphold the Constitution of the United States, we are concerned about American involvement in the spiral of violence in the Middle East. We firmly believe that the use of military force is not contributing to long-term solutions, but rather is creating more enemies and extremism. As people who have experienced war first hand and seen the costs to our troops and their families and to innocent civilians caught in the cross-fire, we believe that it is more productive to address the underlying causes of conflict and to seek solutions that promote long-term stability and well-being in regions of conflict.

What are the causes of conflict?

As veterans, we ask what causes conflict and extremism? We note that all of the highjackers on 9-11 were college graduates. What turns people like this into suicide extremists? Until we understand the causes, we will never really be able to effectively address extremism. Social science studies indicate that almost all revolutionary movements start out as reform movements, but when people cannot address their problems through the existing system they turn to more radical systems. We can see this in our own history, beginning with the American Revolution.

Many of the conflicts in the Middle East are rooted in particular tribal, ethnic, and religious factions who have found no way to resolve their problems through existing and often repressive regimes. For example, many Shiites in the eastern oil-producing areas of Saudi Arabia have felt alienated under the Sunni Salafi movement sanctioned by the kingdom. Saudi Arabia has supported Sunni rebels in Syria, while Iran has supported the Shiite-based government of Assad. We can see similar parallels in Western history, such as the Thirty Years War that was framed in terms of Protestant-Catholic conflicts, though many of the divisions also involved political and economic forces.

Western states have often played a role in these conflicts. For example, after WWI, national boundaries drawn by victorious Western powers cut through tribal, ethnic, and religious groups, and put different people together in a political system where one group's interests conflicted with those of other groups. After WWII, Western countries supported the establishment of a Jewish state that displaced Arabs who had lived in the area for many generations. The U.S. was involved in the overthrow of a popular government in Iran, and in the subsequent installation of the oppressive regime of the Shah. We can easily understand how America can be seen as the root of many problems experienced by the people of the Middle East.

What are our long-term goals in the Middle East?

What results do we expect from our policies in the Middle East? And what have been the actual results over the last 14 years of military involvement in the region? Have we produced stability? Have we helped people realize their basic needs in life? The goals for U.S. involvements in the Middle East have often been based on short-sighted vested interests rather than clear far-sighted goals, and our policies have not adequately considered long-term consequences of our actions. As a result, we have thus gotten entangled in the long history of factional conflicts in the Middle East by backing one side then another side. For example, The U.S. provided support to anti-Soviet Mujahideen in Afghanistan, which evolved into the Taliban who then resisted the American-led military invasion of their country.

Because of our shifting goals and policies, we have found many cases where previous actions have later turned against us. We have armed some groups whose weapons are now being used against our interests, and "friendly" groups have proven to be fluid in their support of U.S. agendas. Such short-sighted practices as the U.S. exempting current air strikes from standards on civilian deaths have driven the recruitment of the Islamic State.

As a result, we have often created new instabilities, divisions, and cycles of violence. For example, the current foundation of the Islamic State is a direct outgrowth of the U.S. invasion of Iraq. U.S. forces drove the group out of Iraq into Syria, where they established a strong base. Then, the U.S. support for the new Shiite-based Iraqi government resulted in many Iraqi Sunnis feeling disenfranchised and alienated, and turning to IS as a visible way to address their grievances. We are now caught in an ongoing cycle of conflicts which we cannot win, which many claim violates both U.S. and international law.

As always, we veterans ask what are the costs of war? While a few benefit from war, many pay a deep social and psychological price from armed conflicts. Our own troops oppose another war in the Middle East. American troops and their families have always borne the costs of military interventions. Not only the lost lives, but large proportions of those who return from war suffer physical and psychological trauma for the rest of their lives, as well as high suicide, family violence, and other consequences of war. Currently, there are a number of local Iraq vets who are suffering renewed PTSD triggered by new military actions, and even vets from other wars. The costs of war also include the millions of civilians who are killed and whose lives are destroyed in the cross-fire.  Iraqis themselves are skeptical about the current war on ISIL.

This is a major cause of recruitment for insurgents, just like in the American Revolutionary War.  Americans have spent $5 trillion in our Middle East wars, and in addition we are currently spending over $10 million a day in military actions. Not only has this had devastating effects on the Americans economy and workers, but we have to ask how this money could have been invested this to address the causes of conflicts in the Middle East?

What Are Our Long-Term Solutions?

As military veterans and families, we call for a full debate in Congress on the causes and long-term solutions in the Middle East.

Congress is supposed to represent the different views of Americans, and has a constitutional responsibility to identify long-term outcome goals from U.S. involvement in international affairs. What are our long-term goals, and what will be the consequences of proposed actions? The House of Representatives has already declared its constitutional right to declare war in Congressional Resolution 105: Prohibiting the President from deploying or maintaining United States Armed Forces in a sustained combat role in Iraq without specific, subsequent statutory authorization.

We ask  that our members of the U.S. Senate and House declare their support for a full debate on the causes of conflict and long-term solutions in the Middle East. Has your member of Congress come out in support of such a debate before exercising their constitutional authority of military actions?

Instead of pouring more arms into the Middle East and feeding further conflict, organizations like the Friends Committee on National Legislation offer other options for supporting stability in the region, including: