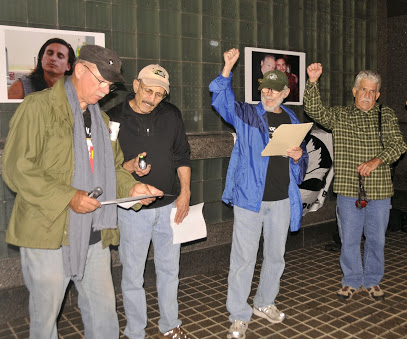 A beautiful celebration of brother Jacob George, some reading of the names, and at 10 pm, instead of a small army of cops, a visit from a representative of the mayor's office, just making sure we were not being disturbed. Tarak worked very hard all week, calling members of the City Council and the mayor's office to make sure that the letter had been read. The mayor's rep says we should call him tomorrow to talk about how we can get the closing time changed permanently.

None of this would have happened without the beautiful and dignified actions we all took part in beginning with May Day 2012. We have shown the power of nonviolent direct action, strategically planned, to push back against repression. Thanks to everyone for their participation in all our events at the VVM, and we will keep coming back as long as wars of empire are raging around the world, to draw the connections, expose the lies and betrayals, and assert our right to assemble and express ourselves peacefully.

Special thanks tonight to Bill Perry for the huge prints of photos of Jacob that set the stage for our remembrance.