This is an invitation.

We are U.S. military veterans who organized and led the Veterans For Peace and Iraq Veterans Against the War contingent in the People’s Climate March Sunday, Sept. 21. The following day a number of us joined the Flood Wall Street action.

You said something quite significant regarding the Climate March and Flood Wall Street and many of us appreciated those remarks, especially coming from the mayor of New York.

You said, “First of all, I think the First Amendment is a little more important than traffic. The right of people to make their voices heard, regardless of their views, is a fundamental American value. And we'll protect that value.”

This viewpoint is very welcome to us, and a refreshing change from the attitude and behavior of the previous administration.

In light of your views, we would like to invite you to join us Oct. 7 at the Vietnam Veterans Memorial Plaza. This plaza, located at 55 Water St., is a place you are no doubt familiar with. Enshrined there are the names of those from New York State who died in that tragic and futile war.

Almost all war memorials throughout the country are open 24 hours, every day, year round, recognizing that there is no time when the memories of veterans and those who loved them shut down.

The Vietnam Veterans Memorial, a New York City park that people meander through from Water Street and South Street at all hours, is closed at 10 pm. The park is actually an open plaza with no effective way nor any justifiable rationale to close it — ever.

Sensibly, people are not normally arrested for being in the Memorial Plaza after 10 pm, nor even told to leave.

In 2012 and 2013 on Oct 7, marking the beginning of the war in Afghanistan, veterans from WWII, Korea, and the Vietnam, Iraq and Afghanistan wars were in the park to speak out against war, especially the ongoing war in Afghanistan, and to expose the lies and betrayals around U.S. wars of empire including Vietnam that have destroyed the lives of so many human beings.

We were there to protest continued war, honor those who had suffered and died, protest the closing of the memorial at 10 pm and push back against the narrowing of the definition of First Amendment rights.

At 10 pm, we were at the wall, soulfully reading the names of the dead and laying flowers for the fallen.

Many of us were in tears as we made this act of remembrance. We were dignified; we were peaceful; we were veteran patriots doing what we had a right and a moral obligation to do.

We were not disturbing the peace; we were not committing any illegal action, yet many of the veterans were arrested those nights for being in the park after 10 pm.

Grief does not keep hours. There are over 22 suicides by veterans each day. One of those deaths was Jacob George, a veteran of the Afghanistan War, a wonderful musician, poet and bicycle riding ambassador for peace and justice who, in his all too short life, inspired many to work for a war-free, more sustainable and peaceful world.

This Oct. 7, we will gather at the Vietnam Veterans Memorial to remember Jacob George and the countless veterans whose names are not on the wall. Veterans and their loved ones seek healing from nightmares and PTSD in this solemn place.

As members of Veterans For Peace and Iraq Veterans Against the War, we feel it is important to remind you that this Vietnam Memorial is still not open to the public 24/7.

We invite you to join us at 10 pm on Oct. 7 at the Vietnam Veterans Memorial to remember Jacob and all those others needlessly sacrificed to the gods of war. For more information, please contact Tarak Kauff (below). 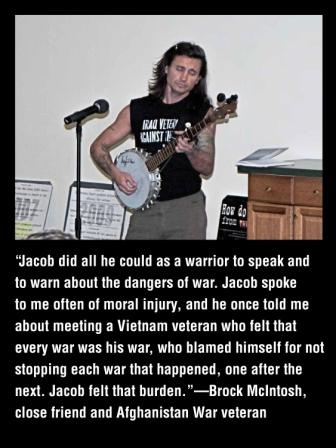