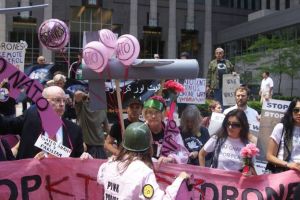 Veterans For Peace joined with Code Pink, World Can't Wait and Afghans For Peace in a very creative and spirited anti-drone protest today in Chicago. Taking advantage of all the media who are waiting for some action, we started at Obama campaign headquarters and moved on to the embassies of Canada, the United Kingdom and Germany, three of the leading NATO participants in Afghanistan. VFP President Leah Bolger was interviewed by many media, as was Erik Lobo from Chicago VFP, Col. Ann Wright, and Medea Benjamin.

VFP members Will Covert and Helen Jaccard participated in a "die-in," and Steve Bray carried one of the drone mock-ups. Several other VFP members, including Kenneth Ashe from Asheville, North Carolina, also participated. A boatload of media followed us to every stop and recorded everything we did, so I imagine that many people saw this protest and learned a lot, including that "When Drones Fly, Children Die." Around our necks we wore the names of Pakistani civilians, including young children, who have been killed in Obama's drone strikes.