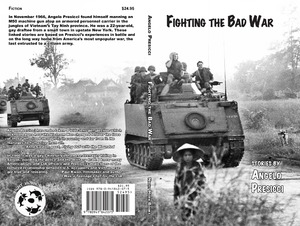 Synopsis for Fighting the Bad War

Morgan and Ernie take us on an underground existential excursion following a firefight in The Tunnel. Cherokee Ernie is closeted Morgan's heartthrob who appears again in the title story as Morgan's crewmate. Wilson the half-track driver plays a role, as well, in the title story, and returns as the main character in R&R, and then again in two post-Vietnam stories, Three Survivors and Freeway.

Joey arrives in Vietnam without a set assignment. He plays the starring role in Countdown, about his meeting Tim, who is about to end his Vietnam tour. Joey ends up being sent to the 11th where he crews on a half-track in the title story, and dies in mortar attack during a poker game in the story, Poker Night. Later we meet Henry, prominent in Poker Night, and Francine, Joey's girlfriend, in A Stranger's Hand, an emotional visit to the Vietnam Memorial in Washington D.C.

Afternoon Delight is from the point of view of Sen Wah, a merchant's daughter in a hamlet near Blackhorse. Through her we see how an 11th troop's daytime leave goes bad. She later returns as the mother of, Xá-áan Loc, a son by her Vietcong lover. Xá-áan Loc is the central character in the story, His Land of Dreams, set in San Francisco during his troubled adolescence

Graveside Etiquette, The Race, and A Letter to His Friend, take us on diverse journeys. Graveside shows us GIs orchestrated by their commanding officer at the unearthing of a suspect VC grave. The Race is a brief and brutal scene of men turned foul and violent at war. In A Letter to a Friend E-4 Ted writes his friend, Ken, about his pursuit of 1st Lieutenant Eric who had encouraged a sexual liaison, a mistake that ends in dishonorable discharges.

The Activist revisits the life of Lieutenant Tomas Carson, wounded in the title story, and his peace activist girlfriend, Banefsha, living in Berkeley. Wilson appears in Three Survivors, a story examining his involvement with a beautiful campus activist who challenges his ambivalence about Vietnam. He appears again in Freeway, in his mind's surreal tableau on an accident stalled LA freeway.

We see Morgan later in a San Francisco laundromat where he encounters a homeless veteran in When You Coming Home. While Remembering Cliff is Cliff's girlfriend, Carol, retelling how she met and dated streetwise Cliff against her mother's wishes, and then goes on to detail Cliff's fate during his second tour. Cliff is prominent in the title story and in Poker Night, exhibiting his ghetto persona with racial undercurrents.

And, Hoping to Forget is from Tollie's point of view, in therapy where he relives killing a 10 year old Vietnamese in an impulsive act.

I believe the audience will be younger generations, children and grandchildren of those who fought, and those who did not. I am convinced the collection will also appeal to a crossover readership, those who did and didn't' oppose the war, and those still on the history's fence. History lovers, short story lovers, are also on my radar. As well, fans of tales of love and loss, and of complex emotional crises. And although the experience that inspired these stories is passionately antiwar, the stories might not reflect those sentiments for the reader. I hope that broadens the audience.